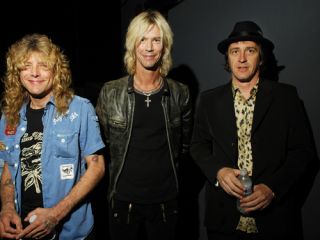 Two days after Axl Rose stated that he was declining his induction with Guns N' Roses into the Rock And Roll Hall Of Fame, Izzy Stradlin, who quit the band in 1991, has finally broken his silence on the matter.

In an official statement posted today, Stradlin wrote, "I have waited up to this point to see what would become of the GN'R induction into Rock And Roll Hall Of Fame. I would like to say THANK YOU and GRACIAS to Rock And Roll Hall Of Fame for the acknowledgement of our works over the years as a band. BIG THANKS to all my bandmates who helped get us to where we are today.

"And, of course, THANK YOU to all of the people on this planet (including, but not limited to, the entire universe and beyond, etc., etc., etc.) who have supported Guns N' Roses from day one. Adios, Amigos!"

Stradlin's message was posted on Duff McKagan's blog on Seattle Weekly.com. "Izzy asked me to do him a favor and sort of get this out for him," McKagan wrote. "Izzy don't Tweet, etc."

It is still unclear whether Stradlin plans on attending the Rock Hall induction ceremony, which takes place Saturday, 14 April, in Cleveland, Ohio.