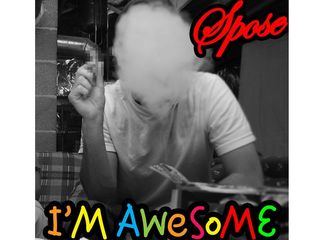 You could be looking at 2010's newest star. He's in there somewhere

The song is called I'm Awesome and the artist goes by the name of Spose. And before long, both the track and the rapper might be world famous.

Until now, Spose was better known as one Ryan Peters. The 24-year-old, who hails from Wells, Maine and attends college in Boston, recorded I'm Awesome and included it on his mix tape We Smoked It All last fall.

And then all hell broke loose.

Mark Curdo, host of the Spinout show on WCYY, a Portland, Maine radio station, started playing I'm Awesome - and the reaction was immediate. Phone calls flooded the switchboard, causing competing stations to jump on the bandwagon. Within weeks, the song soon rivaled Lady Gaga and Taylor Swift for spins.

Curdo signed on as Peters' manager, and last month helped negotiate a deal for the rapper with Universal Republic.

So, will I'm Awesome (check it out below) become the next big hit of 2010? It certainly has all the right elements: a hook you can't shake, tongue-in-cheek - OK, they're downright ridiculous - lyrics that belie the song's self-aggrandizing title...Oh, and did we mention it's got a hook you just can't shake?

Beyond that, it has that certain something inherent in all across-the-board smashes - a love it or hate it essence, otherwise known as 'buzz.'

What do you think? Is I'm Awesome awesome...or awful? (By the way, there is an occasional use of profanity in the track, so let's call it NSFW. Listen with headphones on!)