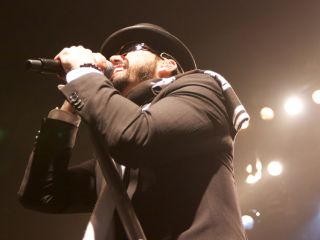 For JD Fortune, it's another reversal of fortune (Image credit: Brian Patterson/Corbis)

For INXS singer JD Fortune, the second time wasn't the charm. The Canadian-born, reality TV-winning vocalist has been kicked out of the Australian band for the second time in two years.

Fortune, who replaced original frontman Michael Hutchence (who died in 1997), became a member of INXS in 2005 to much hoopla on the show Rockstar: INXS. Four years later, he was given the boot.

Of his unceremonious sacking at the time, he said, "I was in an airport in Hong Kong and literally got handshakes that said 'Thank you very much.'"

Following his highly publicized dismissal (during which he was reportedly living in his car), Fortune started performing with INXS again. But he sang on only one track on their last album, the guest vocalist-oriented Original Sin. It would, apparently, he his last recording with the band.

This week, INXS posted a new song, Tiny Summer (above), on their website, with a 'mystery' vocalist at the helm. In addition, the following message on the site reads: "There has been a lot of speculation regarding INXS and JD Fortune. To all our friends and family, we would live to say we have gone our separate ways to pursue different musical paths. This is a mutual and amicable decision. We would like to thank JD for all the memories, and wish him all the best for his future endeavors."

Which all sounds nice and tidy, except for the 'mutual and amicable' part. On his Twitter account last month, Fortune wrote, "As of now I have not been invited to be a part of INXS's new music." Hmmm...