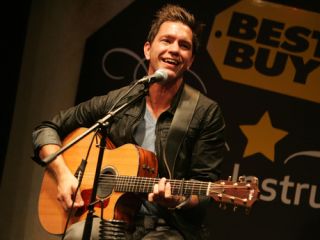 Pop singer-songwriter Andy Grammer has scored a couple of big-time radio hits with his breezy, feel-good, self-help anthems Keep Your Head Up and Fine By Me. But it wasn't long ago that the former New Yorker, who transplanted himself to California a couple of years ago, was showcasing his talents for much smaller audience shares as a busker on the streets of Santa Monica.

"Street performing can be a great teaching ground and a barometer for what you're doing," Grammer says. "It's rough and unforgiving at times, but it can be wild and fun and a real open canvas for your creativity."

And profitable - at least on some days. "You can make money," says Grammer, "provided you put your time in and really learn how to work it. One day I sold 100 CDs - at 10 bucks a pop, that was pretty sweet."

With three headline tours behind him since the release of his self-titled debut album last year, Grammer is now a pro at handling bigger crowds and stages. He's currently on the road again, opening for Gavin DeGraw and Colbie Caillat, and in a couple of weeks, he'll be rubbing shoulders with the likes of Kenny Chesney, Kris Kristofferson, John Hiatt, Amy Lee, Shooter Jennings and Lucinda Williams, among others when he performs at We Walk The Line: A Celebration Of The Music Of Johnny Cash. "I'm still pinching myself to be playing that show," he admits. "I'm going to put my heart into it and do my best."

MusicRadar sat down with Grammer to talk about the fine art of street performing (we even got him to expand on his recently Tweeted Top 10 tips for buskers), his process for writing and demoing, and how Johnny Cash and Rihanna both fit into his musical landscape.

Why did you start busking? Was it out of total necessity?

"I'd say so, yeah. You need to be growing and getting better, and in LA, it's so hard to get bookings. You literally have to pay clubs to book you. It's pay to play, and then you only get 30 minutes. That's no way to get good.

"So I decided to get out there to do my thing, to play for as long as I wanted and to make money to pay the rent. The Beatles played at strip clubs in Germany all night, and that's how they got good. I would think about them when I was out in the street. I would sing for six, eight hours a day. Santa Monica was my Hamburg.

How did street performing affect your songwriting?

"You want to write a song that gets people's attention. If you can get people to stop and turn their heads, then you're onto something. I found that playing covers was helpful to my songwriting process because it taught me what worked and what didn't.

"Take Sunday Morning by Maroon 5. For whatever reason, folks would literally stop in their tracks whenever I played that song. That told me that, not only is a great song, but it's the type of song that works when I sing it.

"Whenever I played Michael Jackson, nobody stopped. Go figure. But if I played Sunday Morning by Maroon 5, everybody stopped. It didn't take long for me to tell myself, 'All right, I need to write five songs like that.' So what happens is, you write a bunch of terrible ones till you get the good ones. My album is a bunch of street-tested songs that people liked."

Did busking affect your guitar playing? One would imagine you'd play harder and get in people's faces more.

"Sure, absolutely. Busking builds you up in all those ways - your guitar playing, your crowd presence, your banter between songs. It's funny because once I had enough people standing around to see me, I had to dial it down performance-wise and not wring people's necks. I was in attack-mode so much of the time. But it's better to have to turn that off than to turn it up."

How exactly do you write? Do you do it every day, or do you simply wait for inspiration?

"If were giving advice to somebody, I'd say to write every day. On the other hand, that's not what I do. I tend to me an all-in-type of guy, so I get in a zone to write and then that's all I do. I'll spend eight hours doing nothing but chasing that one song. That's what works for me."

How do you demo? What kind of a setup do you have?

"I stretch GarageBand to its limits - that's what I do. [laughs] With GarageBand, I can definitely get my point across. I'm not a producer yet, so it's probably cool that I can't take things too far. When I get with a producer, there's still an element of 'Let's do this together.'

"I hope that in my career I can get good enough where I'll be able to do it all by myself. I think that's probably the most efficient way to work."

What's the story behind the song Biggest Man In Los Angeles?

"See, I'm a wannabe rapper. I love hip-hop. So one day I was walking up and down the Santa Monica pier, just coming up with these rhymes about my situation. Even though I'm not a rapper, I was pulling hip-hop influences and trying to put them over my acoustic guitar playing.

"Doing the street performing thing, there's so much to pull from lyrically. Everything in that song is something that happened to me. The balloon guy really was mean to me. There was a monkey there when I was singing. It's all true, and I told it in a hip-hop kind of way."

On your live EP, you do a very cool cover of Rihanna's We Found Love. What made you choose that song?

"We knew that we wanted to do a cover that would get everybody to freak out at shows. Finding the right one is a lot harder than it seems; a lot of effort went into it. We never did a dance song before, and that one worked out well. It's a beautiful song. The response to the way we do it has been awesome."

You're going to play the tribute to Johnny Cash pretty soon. Was he a big influence on you?

"I don't think you can get away from Johnny Cash if you tried. Anybody who picks up an acoustic guitar and sings and tries to tell stories in their songs, Johnny Cash is there in some way. You have to respect the man. When he sang a song, it became a Johnny Cash song. He was able to get into your heart through the somber door, which I don't necessarily do that well, but I think there's a hint of his attitude that we can all take something from. I'm really psyched to play this show. I can't wait."

OK, let's go through your tips for buskers. Maybe you can expand on them a little bit.

All right, these aren't exactly how you Tweeted them… Number one: "Work out a unique cover tune." We've talked about that a bit already…

"Covers work so well. If you can give somebody something they know already, and then if you can get them to sing with you, they are invested in you. You're providing them with a service, whereas before they were providing you with a service by listening to you."

"Yes, because they will scream and make noise, and you can double your crowd fast. Keep building excitement. You can go from 10 to 50 people if you work the situation."

"That's right. It's important to be at a place where there's a lot of foot traffic, so that when you do put out the bait of a cover, or if you do make everybody cheer, it makes a difference."

Number four: "Make a tip jar that encourages people to purchase CDs on their own while you're playing."

"What you have to do is make a top jar that actually says, 'Make change. I trust you.' Set up a situation where transactions can take place but you don't have to stop."

"Yeah, but it's hard to go out and spend $100 on a carpet when you're working with such a small budget. I might not have even made $100 that day. Still, it's important to make your area something cool to look at. Getting people's attention is almost like attraction a squirrel: everything has to be very safe and comfortable and inviting."

Six: "Make friends with those louder than you."

"You can have break dancers next to you getting all kinds of cheers and claps - it can be tough to compete with something like that. Or maybe a hip-hop group will turn their music up really loud. You can't try to out-loud them, because then everybody's going to get louder. So go over to them and say, 'How about you play for 30 minutes, then I'll do 30 minutes.' It makes things non-competitive, and everybody wins."

"Nobody is coming to hear your 90-minute concert. And the fact is, you might really only have 30 minutes of material that are really great. So pick your best 15 minutes and keep doing that set over and over."

"Some people do that, and it's a turn-off. You're not going to get somebody to buy your $10 CD if you beg. You might make a dollar out of pity, but people will buy your CDs if you're really talented and there's magic in what you just did. If you beg, it sucks all the magic out."

Number nine: "Get there early."

"This goes back to location. A lot of the time, all the good spots for foot traffic will be taken early. You have to be hungrier that everybody else and stake your claim. So get there early and pick the best spot. That's your concert stage for the day - make it count."

"If people don't like what you're doing, it's not their fault. I've seen people perform, and at the end of their set they'll say things like, 'Man, you people suck today!' You can't do that. If you're not connecting with the crowd, it's up to you to figure it out."

Last question: You're playing big shows now, getting nice tours, doing TV appearances - would you ever go back to busking just to keep your chops up?

"Uh… no. [laughs] Because I'm working so hard in other areas, whenever I get some time off, I try to just relax. And the thing about busking is, it's really fun, but it's sort of like working the in the mailroom: once you get promoted and you get your own office, you never want to go back again."