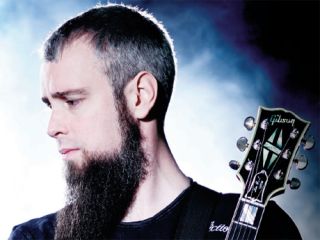 Last year was not an easy one for In Flames. But the greatest challenges can bring out the best in a musician. For guitarist Björn Gelotte, that rough patch meant losing the songwriting and playing partner that the band's sound and reputation had been founded on. Thankfully, the vacuum he left behind has spurred Björn on to lead the band into a whole new era.

"I was sad, but at the same time it was something we knew would happen sooner or later and had to end somehow," he reflects on former guitarist Jesper Strömblad's decision to quit early last year. "It wasn't really a surprise, but then it dawned on me: 'I'm on my own'."

Strömblad's struggles with alcoholism in the preceding year were known. He was no longer touring with In Flames, and the band had recruited longtime friend Niclas Engelin to help out. Still, from an outsider's perspective at least, the loss of Strömblad was a crisis. The band's founder member had helped create the twin-harmony melding of Swedish folk, Iron Maiden and extreme metal that had made the group an integral force in the creation of melodic death metal.

It was a style developed in the '90s on their The Jester Race and Whoracle albums, as well as in releases from the band's Gothenburg friends and peers, such as At The Gates and Dark Tranquillity.

"The day he told me he was going to quit, because he couldn't tour and was in kind of a bad state, I went down to the studio, sat down with my guitar and pressed record on the Pro Tools rig, and waited for something to happen. It took about 10 seconds. First, I had two or three riffs and then, all of a sudden, I'd been there for three or four hours… From that point, I knew this wasn't going to be a problem - it was just going to be different."

Months later, those ideas from the band's IF Studios in Gothenburg had grown into an album. In Flames spent longer on Sounds Of A Playground Fading than any album before it. It was a three-stage recording process, tweaked and developed from Björn's demos to full band demos and the final sessions with producer Roberto Laghi, who also worked on 2008's A Sense Of Purpose.

The attention to detail shows - it's another step forward for the modern In Flames sound that still frequently recalls their longtime melodic trademarks. But it's not just vindication for Björn.

"The dynamic of the songwriting has really switched now, because it just used to be me and Jesper readying everything and basically telling everybody how it should sound," he says. "That's changed now and I feel like I need my buddies in the band more than I ever realised before. And it's a good feeling when everybody surrounding you is positive [about] what you're doing, and giving good input. It's made me grow as a guitar player."

Despite being the sole guitarist on the album, Björn hasn't forgotten In Flames' trademark harmony flourishes - both within the twin lead lines that blaze through the record and the denser riff hooks that define songs such as Darker Times and Where The Dead Ships Dwell.

There have been changes as well. A New Dawn features a successful collaboration with a string quintet - used to lift the song to a peak, rather than provide a token measure - while the closing delay-heavy Liberation is the band's unique take on rock. But the real shift here is just how much more open the In Flames sound has become - not just in the vocal melodies from Anders Fridén and how well the band has integrated synth layers, but the whole guitar tone.

There was more to it than using an all-star cast of JVM, JMP, EVH, AC30 and ultra clean Jazz Chorus with Björn's trusted EMG-loaded Les Paul Custom, plus a Studio baritone that he wisely picked up before they were discontinued. "We did a lot of things to open up the sound, because it's very easy to just add stuff," admits Björn. "One thing to do is you remove a lot of gain and distortion - you can hear the pick hitting the strings and that helps a lot with the rest of the sound. All of a sudden, you can hear the bass and more of the drums. It cleans out the fuzziness in the middle and the low end. It allows every instrument to fill its space."

Björn's also one of modern metal's great underrated lead players and has grown into bluesier expression. It's more a case of 'sounds of a wah wailing' on this album as Björn wears his '70s Blackmore and Schenker influences on his fretboard. "If you hit that note, you don't need to do more. I guess it's old-school, but I've never been a shredder. It's more important for me to hit that right note and really focus on how I do it.

"It's become a lot about speed in metal nowadays, and there's nothing wrong with speed, but with everything you need to use it with a sense of taste. A lot of times, the challenge for me is finding a melody that works with the rest of the song. That's harder than doing something really fast."

Sounds Of A Playground Fading as a title seems to hold resonance for a band who are growing older while entering a new era. "I'm rarely looking back or forward - I try to live right now," says Björn. "Everything changes, hopefully for the positive, but we saw close to us how they can change not so positively. That's the reality: we're not in the playground any more, but out in the real world."

"It's hard to have someone you love, who's close to you, and see them go down. But it was a chance for us to make sure he got all the time he needed to get back on track and be well again. Also, we could start over - not musically, but as friends again, see where this takes us. And it's been very, very interesting."