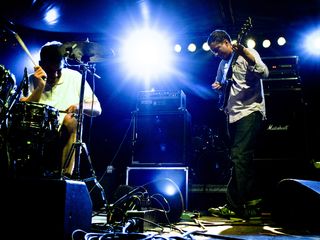 When Battles released their debut album Mirrored back in 2007 they proved themselves to be a band that were so much more than the sum of their already impressive parts.

Prior to that album's release the then-four-piece from New York were generally referred via their members' affiliations to the somewhat-niche American genre of math rock.

During the '90s drum-powerhouse John Stanier played as a member of experimental hardcore band Helmet; guitarist and synth player Ian Williams was a member of instrumental rockers Don Caballero; guitarist and bassist Dave Konopka performed with cult rock band Lynx, while multi-instrumentalist - and son of legendary jazz musician Anthony Braxton - Tyondai Braxton carved out a name for himself with his loop-manipulating solo work.

Yet Mirrored - which was released on highly regarded electronic label Warp - found success well beyond the leftfield experimental rock crowd it was expected to. Despite being an album with its roots firmly planted in angular guitar music, the record saw the band draw on influences from punk, dance music and prog rock.

The somewhat divisive, pitch-shifted vocals from Braxton and pounding drum work of Stanier helped turn lead single Atlas into a most unlikely hit. And Battles found themselves performing live on the BBC (Later With Jools Holland), soundtracking TV shows and adverts for the likes of Audi and Honda and receiving album of the year nods from the NME, The Guardian and Time magazine.

A lot has changed for Battles since Mirrored was released. In August 2010, at a time when the band were already late delivering their much-anticipated second album, it was announced that Braxton had left to focus on his solo work.

For better or worse, Braxton's departure forced the remaining three members to reinvent themselves as a three-piece, and totally rebuild the half-finished album from the ground up. The resulting album - Gloss Drop - was released last month and sees Battles revitalised and on top form.

"It created this do-or-die situation," guitarist and bassist Dave Konopka tells us, as we sit down to talk on the band's tour bus.

"Before Ty left we were going into the studio unprepared - there was such a lack of communication and lack of inspiration," he continues. "What we thought was going to involve us all doing a lot of multitasking just became isolation. As a four-piece we barely saw each other. We were in the same studio where we were all sleeping. I'd see bits of Ian and John, but Ty was just doing his own stuff."

The word isolation seems to crop up a lot as Dave tell us about those initial recording sessions.

"We were working at Machines With Magnets, the same studios where we recorded Mirrored, and working with the same engineers - Keith Suoza and Seth Manchester. But they took on more of a production role on this album," he explains.

"We were handing stuff we'd each recorded in to them and they would take it and help us piece together songs in the control room.

"But it was proving to be really difficult because there was so much isolation going on. I don't think anybody liked anything that anyone else was doing. It became this really difficult project, trying to make something when you have no idea what's going on within your own band.

"When you realise that there's this isolation going on, you start to overcompensate for yourself," Dave goes on. "You think, 'OK, if I can't hear what he's doing, I can't work off his parts', so you end up trying to make the song into what you think it should be.

"So even before we became a three-piece we were taking on a bigger work load - because you'd be scared about the lack of enthusiasm and work ethic that your bandmates have.

"It really came down to Ty leaving the band; that was like the clouds breaking. We realised, 'We've let this slide, we've let all of this communication slip away and we can't let that happen.'

"So it came down to salvaging all of our parts, restructuring the songs and writing a few new tracks."

As Dave explains, the final versions of tracks that appear on Gloss Drop were all drastically reworked from those original sessions.

"Ice Cream [Gloss Drop's lead single] was one of the first songs that we finished and that needed restructuring, but it was mostly that Ty was singing all over it," he tells us. "We didn't want to represent him on this album at all.

"Then there were songs like Sweetie And Shag, which was completely different and it was really lame. We totally revamped it, using the same parts but making it a whole new animal out of it."

As Dave informs us, much of Tyondai's contributions to the original Gloss Drop sessions were focused around his vocals. With him pulled from the equation it left Battles with a difficult choice to make - whether to find a replacement vocalist or to revert to the band's instrumental roots.

"We were really just reappropriating ourselves on the fly," he explains. "I remember we would have constant conversations where Ian and John would say, 'Maybe we should get a singer?' and I'd say, 'Let's just go fucking instrumental and not have to worry about this shit'.

"I guess none of us really wanted to be exclusively instrumental though. My initial inclination to be an instrumental band was just so we could be properly self-sufficient. Plus, I didn't like the idea of having to find some singer and straight away commit to them for an album - for me that idea was worse than just keeping Ty's parts."

Battles on stage at this year's Primavera Sound festival in Barcelona. © Gianluca battista/Demotix/Corbis

"The guest vocalist thing was probably the best option for us," Dave explains, "we still had to figure out how we were going to do it on tour, but it just happed on the fly. We had a deadline to reach, so we put together a list of guest vocalists we needed for a couple of songs.

"The vocalists wrote all their parts themselves. The songs were pretty much done by that point, so we sent them the tracks and they each sent us back demos with a couple of ideas."

As we sit down to speak with them, Battles are already a couple of months into a mammoth year of touring in support of the new album. While recording an album with one less member and guest vocalists is one thing, working out how to perform live as a three-piece has, understandably, proved to be an even bigger challenge for the band.

"I think I prefer the three-piece line-up, there's more of a dependence on each other," he explains, "in a four-piece you can be in your own world, but when somebody's in their own world it doesn't work."

To compensate for the absence of the guest vocalists during their live shows Battles are joined on stage by two six-foot LCD screens used to play video samples of each vocalist, synced in time with their vocal samples.

"It's a work in progress," Dave admits. "We're trying to balance the man/machine dichotomy - we're using technology to our advantage."

"Part of the idea of having the screens right onstage is that it's integrated with the three of us playing, it's not like everyone just watches TV above you and the band is playing down below."

For the time being the band aren't performing any of the material from their previous records on tour, opting to only play song that were written as a three-piece. But they seem keen on the challenge of trying to rework old material with their new setup in the future.

"I don't think we're interested in trying to replicate those songs exactly as they are, because we toured on that shit for two years," Dave explains. "If we can keep them fresh, and almost do a remix type of thing with them, then it's more interesting for us and I think it would be a more concise way to get across all of that stuff within one set."

We put it to Dave, who began his career playing guitar in the more punk-grounded world of math-rock, that the way Battles approach music - using multiple loopers and effects, integrating laptops and samplers - must seem a world away from those days of 'straight-up' guitar rock. Has he noticed his playing style change?

"I use two Line6 DL4s, two Gibson Echoplexs and a Boss PS-3 for delay. There's a Fulltone OCD distortion and a custom pedal made by a place in Providence called B-Sharp named a Malazadas - which I use for clean boosts and distortion. Plus I've an EHX Pog-2, which is a great pedal that, when I'm not playing bass and just playing guitar, allows me to have some extra low end in there."

"In Lynx, it was all super-math rock," he tells us, "but the main difference is that I plugged my guitar directly into an amplifier and used zero pedals. That was coming from more of a purist background, it was in the '90s and it was part of that whole Steve Albini influence.

"In retrospect I wish we'd at least used distortion," he laughs. "We relied on that sort of natural distortion, and I just played a Telecaster through a Roland Jazz Chorus, it was totally different.

"It's funny because I use a lot of pedals now, and I play through bass amps - I use Mesa Boogie heads with 8x10 cabs even when I'm playing guitar - but still I think we have the same kind of approach to the music. It's just a completely different process now."

Gloss Drop is out now on Warp Records. Battles continue to tour throughout Europe, the US and the UK throughout the rest of the year, check out their website for dates.

Look out for a full interview with Battles drummer John Stanier in a forthcoming issue of Rhythm Magazine.