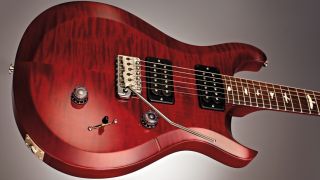 There's no denying the impact PRS guitars have had on modern rock, yet the first PRS model, the Custom, was unveiled way back at NAMM 1985.

Unafraid of wearing its influences on its maple-topped sleeve, the Custom's double- cutaway body recalled the Les Paul Special, while adding the curves of a Stratocaster. The 635mm (25-inch) scale length was halfway between the Fender and Gibson standards, while a mix control produced beefy PAF-type tones and snappier single-coil sounds from a pair of humbuckers. There was even an updated take on Fender's classic vibrato unit, plus finishes echoing Les Paul 'Bursts of the late 50s.

To this day, PRS hasn't stopped tweaking its classic: in 2013, the wallet-friendly USA-made S2 series launched with its own Custom 24 (pictured), costing a releatively affordable £1,375. And largely thanks to the Custom's success, PRS is now the third biggest-selling guitar company in the US - just behind its two biggest inspirations.

The Custom 22 is put into production.

The SE Custom appears in the Korean-made SE line.