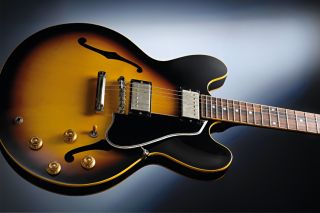 "I came up with the idea of putting a solid block of maple in an acoustic model,” said Ted McCarty, company president and pioneer of guitar design during Gibson´s ‘golden period´ of the 1950s.

“It would get some of the same tone as a regular solidbody, plus the instrument´s hollow wings would vibrate and we´d get a combination of an electric solidbody and a hollowbody.”

The result of McCarty´s brainstorming is the Gibson ES-335. Launched in 1958, this revolutionary semi-acoustic guitar has seen service with the likes of Eric Clapton (during his stint with Cream in the 60s), Alex Lifeson of Rush and Soundgarden´s Chris Cornell, who was recently honoured with his own signature model.

The genius of the ES-335 is that it offers big-bodied hollowbody tone and sustain in a slim 44.45mm (1.75-inch) thick body. Sustain is boosted by McCarty´s solid block of maple, which runs through the body, providing the anchoring point for the bridge, tailpiece and twin humbuckers.

The block also helps prevent the feedback that troubles fully hollow electrics like the Epiphone ES-230TD Casino and Gibson ES-330. Alvin Lee of Ten Years After proved how well an ES-335 performs at high gain when he pulled incendiary runs from ‘Big Red´ (pimped with a single coil in the middle position) at the Woodstock Festival.

While Gibson produced a number of variations on the ES-335 theme over the years (including the top-line Varitone-loaded ES-355, the chassis for blues legend BB King´s Lucille signature model), the fat-necked ´58 to ´60 ‘Dots´ are considered the greatest ever made.

In classic Gibson style, no sooner had it created a masterpiece, its designers began tweaking. In late 1960, the much-loved fat neck was thinned down considerably, while the dot inlays were replaced with fussy pearl ‘blocks´ in 1962. The Les Paul-style stop tailpiece, doing a perfectly acceptable job of anchoring the strings to the body, was switched for a trapeze unit in 1965.

All these ‘improvements´ were reversed when the ES-335 ‘Dot´ was reissued in 1981, although the new f-hole-less ES-335 Studio, with single Dirty Fingers Plus humbucker, shows Gibson isn´t quite done fiddling with Ted McCarty´s beautiful creation yet.

ES-335 discontinued, then quickly reissued as the 'Dot'