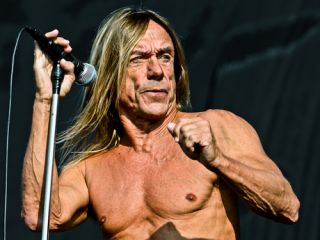 Iggy Pop has a lust for life, but when it comes to modern music... not so much. © Henry Ruggeri/Corbis

Some 10,000 bands played at the recent SXSW music festival, but if you asked Iggy Pop what he thought of them, he'd probably say most of them were awful. The Stooges frontman has posted a video in which he blasted today's music, saying it's like "cheap drinks in a bad supermarket" and that current rockers lack authenticity.

As ambassador for Record Store Day 2012, Pop said, "I think there are some ages, like the one we're living in, when the game is kind of rigged toward products that contain music - sort of like those cheap drinks you get in a bad supermarket where it says, 'Contains 10 percent juice.'

"There's a lot of stuff out there with a bit of music to it, and I think that's OK, but it reminds me of how bad it was to turn on American Bandstand in the '50s and see all the endless, gutless, dickless imitations of Elvis that the American industry decided to push on the kids."

Regarding his role as ambassador for Record Store Day (which takes place on 21 April), Pop said, "I got my name, my musical education and my personality all from working at a record store during my tender years. Small indie shops have always been a mix of theatre and laboratory. In the '50s and '60s the teen kids used to gather after school at these places to listen free to the latest singles and see if they liked the beat."

You can view the Iggy Pop video here.