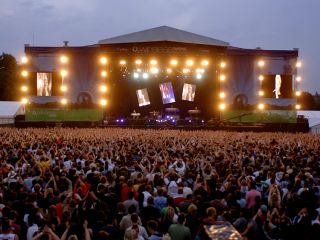 Ever wondered how a festival line-up is put together? Us too! In the first part of an exclusive series, MusicRadar speaks to the curators, directors and bookers from three top UK music festivals to find out, as well as asking them how your band can get on their bill in 2012!

Playing your first ever festival gig is one of the most exciting experiences in a new band's budding career. Yes, you'll probably be playing a stage no bigger than your living room. Yes, you'll have no chance of getting a rider. And yes, your set will be over as soon as you've plugged in, but you will have your collective feet on a ladder that - if you're good enough - will lead you to bigger stages and bigger fees over the years.

Whether you're a dance, electronic or urban pop act; a hardcore, indie or rock band, or something so leftfield and off the wall that you defy classification, between Latitude, Reading and Leeds and Wireless, there's room for everyone.

In this three-part series, MusicRadar speaks to the bookers for each festival to discover how a mammoth festival line-up is crafted, how you can get your band on a bill, and why developing a thick skin is essential when slugging it out with tons of other potential festival newbies.

It may be over for this year's Wireless festival, but landing a slot on such a high profile festival bill is a sure-fire ticket to mainstream popularity. Looking towards next year's line-up and just how a new band can mix with some of the most successful acts in the world, we've landed an interview with one of the UK's biggest music promoters, Steve Homer.

Promoting a diverse range of bands from Kings Of Leon to Fleet Foxes, Steve has a pedigree history of making gigs happen. With a keen interest in nurturing smaller bands and helping them progress through the festival line-up over the years, Steve encourages new bands to be unique. Leaning more on the side of dance, electronica and urban pop, Wireless is the festival for all budding Chemical Brothers and Tinie Tempahs.

What is your job in relation to Wireless festival?

"It sounds like a big job, but once you get the ball rolling and secure the headliners, signing exclusivity agreements and so on, it starts to come together."

You've been with Wireless festival since its inception, but did you work for any other festivals beforehand?

"Before I was at Live Nation, which was Clear Channel back then, I worked at Mean Fiddler and I also worked on Homelands festival and did a bit for Reading and Leeds, on one of their satellite stages.

"I was working at Live Nation when we came up with the idea of utilizing Hyde Park. Prior to the first Wireless festival it was only ever used for really big shows, like Red Hot Chili Peppers, Bon Jovi, The Rolling Stones... huge acts with a long history of album sales and tours.

"Before Wireless, Hyde Park was never an oppourtunity for a smaller band to play as part of multi-stage line-up. The idea was to change how Hyde Park was used. We still run massive shows in there, but with Wireless smaller bands get the chance to play such an iconic venue."

How far in advance of the 2011 Wireless festival did you begin work on the line-up?

"Literally within weeks of it finishing in 2010. Even though you rarely get confirmations on acts prior to the previous festival has finished, it's easier to speak to booking agents and managers about the bands you want on the next year's bill when the festival experience is still fresh in their minds.

"We tried to get The Chemical Brothers to play Wireless last year, but in the end they came along to the festival and we agreed at that point that they would headline 2011.

"It was a similar situation with The Black Eyed Peas. I've been pushing to get them for the past couple of years, and it just so happened to work out in their schedule this time round."

Wireless is different in its structure to other festivals, in that you mainly host each day of the festival as a separate event. How does that work when putting a line-up together?

"With other festivals it's a camping, residential event and people are there for the entire weekend, and with an audience there for three or four days you have to keep all those people satisfied.

"For Wireless in Hyde Park, you're really trying to get people along for one of the three days day initially. So the bill within that day has to be something that will appeal to people coming along for that specific day. The bill reflects each headliner.

"For example, The Chemical Brothers line-up this year had to have a bill that was a little more dance or electronic orientated. Not exclusively, but there is a frame work to play with, an overall theme if you will."

Where do you get your inspiration from when choosing a line-up, and is it just you?

"It's 99.9 percent me choosing the line-up for Wireless. I'm a national music promoter and I handle loads of different acts. I promote Kings Of Leon, Fleet Foxes, Journey... so there's a whole variety of bands that I deal with as a promoter and I'm generally out there quite a bit anyway.

"Again, the headliners are the bands you focus on first. You may have an idea of other bands you would like to play the festival, but it's a case of locking in the headliner and then finessing the bill underneath them.

"I've promoted Tinie Tempah for years, and this is the fourth year he has played Wireless, moving up through the ranks to the point where he's now playing the main stage. Hopefully in years to come, he will headline. That would be a great success story!

"Also, Plan B is playing Wireless this year and he played our very first festival on one of the small satellite stages. There's a number of acts who return, and you always hope to nurture them. It's nice to see progression."

Even though you shape each day around the headlining acts, are there any bands that you just wouldn't look at for any of the bills?

"Because we have a couple of other brands operating within the park as well as Wireless, like Hard Rock Calling, we tend to steer away from hard rock and metal. We've had a few experiments with the more indie alternative market, but that hasn't been successful for us in the past.

"We do have a very good history of urban pop and dance music, so we tend to focus on those genres as a first port of call and work from there."

If a new urban act or dance, electronic band came through and wanted to play Wireless, would they stand a chance of getting on the bill considering it's such a high profile festival?

"Oh yes, definitely. We've done quite a bit with newer artists. Wireless is four stages, and the smaller stage is very much a band stand with a full PA. We tend to have new and less established acts play on the smaller stages. There's every oppourtunity for a new act to be a part of the whole Wireless experience."

How could they get their music in front of you?

What are your top tips for a new band or act looking to land their first festival gig?

"You have to be very resilient, and you have to be prepared to take quite a few knocks. Be persistent, but not overly pushy. The one thing that every festival promoter looks for is a band or act that has a unique selling point. Something that makes them stand out. That could be their live show, or it could be the way they package their music and information, and how they send it out to festival bookers. It's the way in which they get your attention.

"There are so many media outlets for bands to utilise now that it's easy to get your message across. Most bands do the same thing, whether it's sending MP3s or YouTube clips, but try to be unique."

Finally, who would headline your dream Wireless festival?

"My dream act would be Talking Heads. I've worked with David Byrne and also Tom Tom Club individually, but to me Talking Heads would be an ideal festival headliner and one that I would like to promote."

For more information on Wireless and how you can send in your music, demos and information with a view to next year's festival, check out www.wirelessfestival.co.uk