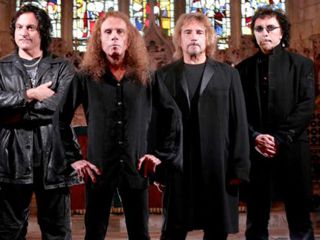 Heaven And Hell - you know, Black Sabbath 2.0, with Ronnie James Dio instead of Ozzy - is working on a new album, the group's first since Dehumanizer in 1992. (Obviously, these guys don't like to be rushed.)

"We've got about six or seven new songs," says guitarist Tony Iommi, "and then we stopped to do this Metal Masters tour. When we finish that, we'll take a couple of weeks off, then carry on writing."

Iommi adds that he's "really pleased" with what the group has come up with so far,assessing the material as "really good, pretty powerful." Heaven And Hell, which also includes drummer Vinnie Appice, has signed a deal with Rhino and is looking to have an album out "as soon as we can," says Iommi.

A new boxed set, The Rules Of Hell, which covers Black Sabbath's Dio years has just been released. The package features the three Dio-era studio albums -1980's Heaven And Hell, 1981's The Mob Rules and Dehumanizer -- as well as 1983's Live Evil concert album. There's no rare or previously unreleased material, which Iommi says is intentional.

"There's bits that I've got somewhere at home," he explains, "but we go onward and upward. I've got tapes and stuff of many years ago of jams and things we've done in the studio, but it's not suitable for release. Instead of going backwards in time, we're going forward and coming up with new stuff."

Regarding the band's dual identity, Iommi admits, "It does get confusing. It really is Black Sabbath, whatever we do. We just choose to go out as Heaven And Hell so everyone knows what they're getting and so people won't expect to hear Iron Man and all those songs. We've done them for so many years, it's nice to do just all the stuff with did with Ronnie again."

Or at least until they go back to doing Iron Man with Ozzy again. Don't think it won't happen.