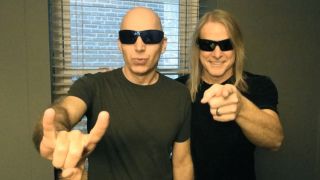 Since late August, Joe Satriani and his ace band (keyboardist Mike Keneally, drummer Marco Minnemann and bassist Bryan Beller) have been knocking out US audiences with a seismic live show that includes hits like Satch Boogie, Ice 9 and Flying In A Blue Dream, along with a heaping portion of the guitarist's dynamite new album, Unstoppable Momentum.

If that weren't enough six-string nirvana, Satch's special guest for the past month has been his good friend, Deep Purple axeman and solo star Steve Morse, who also participated in last year's G3 South American run.

MusicRadar stopped by the Tower Theater in Upper Darby, Pennsylvania, the other day, where we managed to wrangle both guitar greats backstage for a special one-hour podcast interview comprising reader questions. So numerous were the queries, and so voluminous were the guitarists' answers, that we're running the podcast in two parts. You can listen to part one below, and next week we'll present the conclusion.