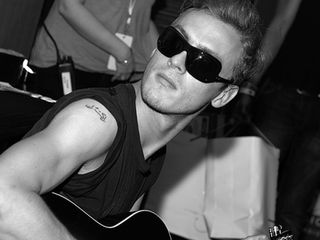 That touch of Velvet?

Velvet Revolver - starring ex Guns N' Roses members Slash and Duff McKagan - have been searching for a new singer since Scott Weiland departed acrimoniously last spring. And they just may have found him in Royston Langdon, recently split from wife Liv Tyler - daughter of Steven Tyler of Aerosmith. (Hey, when Liv Tyler's given you the heave-ho, you could probably stand for some good news.)

According to Entertainment Weekly, Langdon - ex-frontman for the band Spacehog (remember their one and only hit In The Meantime?) - is seriously being considered for the gig after several successful jam sessions in Los Angeles.

"They all got along great," says an insider. "It was really a refreshing change for the band." Velvet Revolver's management couldn't confirm that an offer had been made, and would only say that they're still auditioning prospective singers. But an RCA source says that Langdon is "definitely in the mix."

Back in June, Velvet Revolver drummer Matt Sorum told MusicRadar, "We have a guy right now that we're still... let me see, what would be the correct word... massaging, as you will, sort of checking it out, feeling it out, letting him work with us. I'd rather not say who it is, just because I don't want it to get out that he might be the guy. I mean, we like him, he's awesome. I'm kind of worried that we might be so used to the drama. I kind of looked around at the guys. I said, 'Man, this guy is a super-nice dude. You think we can go with that or what?'"

We shall soon see. In the meantime (pun intended), here's a video of Langdon jamming with Slash and friends on the GN'R hit It's So Easy.