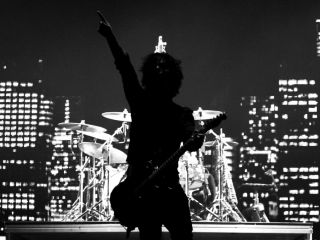 When Green Day opened their 21st Century Breakdown tour at Seattle's Key Arena on 3 July, they were unprepared for the thunderous response they got from the crowd.

"You missed me?" Billie Joe Armstrong bellowed happily in the face of a fan who beckoned him from the mosh pit. "Not as much as I fucking missed you, goddammit!"

With the core trio of Armstrong, bassist Mike Dirnt and drummer Tre Cool aided by two touring guitarists, Jason White and Jeff Matika, along with keyboardist Jason Freese (brother of superstar drummer Josh Freese), Armstrong prowled the stage and catwalk with a showmanship hertofore unseen in past years.

Green Day packed their setlist with songs both new and old, but the highlight of the show was when Armstrong plucked a a young man from the audience, handed him his Les Paul Junior sang while the fan played along to the nine-minute Jesus of Suburbia medley.

"That was fucking amazing!" Armstrong said afterwards. "Tre, take him backstage and suck his dick!"

Check out the fan-shot footage of the lucky (and gifted) fan performing with Green Day: