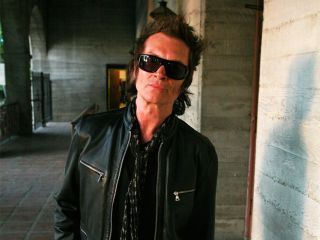 PRESS RELEASE: Glenn Hughes is once again part of the Laney artist roster.

Vocalist/bass guitarist/songwriter Glenn Hughes is a true original. No other rock musician has carved such a distinctive style blending the finest elements of hard rock, soul and funk. That astonishing voice is Hughes' calling card. He's known as a singer's singer: in fact, Stevie Wonder once called Hughes his favourite white singer.

Hughes, a native of Cannock, England, absorbed all kinds of influences, including early British hard rock, the Beatles and, most importantly, American soul and R&B. The sleek Motown sound from Detroit and the gritty Stax/Volt sound from Memphis left their mark on him. The first important band Hughes was a member of that achieved notable success was Trapeze, while in 1973 he joined one of the most popular bands in the world, Deep Purple. The trailblazing hard-rock legends had just weathered the departure of vocalist Ian Gillan and bass guitarist Roger Glover, but guitarist Ritchie Blackmore, keyboardist Jon Lord and drummer Ian Paice continued with the addition of Hughes and David Coverdale. Any scepticism was squelched with the 1974 release of Burn. This stunning album rejuvenated the band and stands tall among Deep Purple classics. In the halcyon days, Purple headlined at the famous California Jam in 1974 in front of quarter of a million people. World tours via Purple's own jet plane, 'The Starship' and two more studio albums later, (the Hughes influenced Stormbringer and Come Taste the Band), Deep Purple finally split in 1976.

Now living in Los Angeles, Glenn's first solo album Play Me Out was released in 1977. He joined former Pat Travers guitarist Pat Thrall to form Hughes/Thrall, which released an acclaimed self-titled album in 1982. Throughout the '80s and '90s, Hughes made countless guest appearances (both credited and un-credited) as a vocalist, bass guitarist or songwriter on other artists' albums, in particular he appeared on the vastly underrated Seventh Star, was officially credited as 'Black Sabbath Featuring Tony Iommi'. Hughes and Iommi remained friends and in the past few years they have released one brand new studio album together. More commercial recognition came when the KLF dubbed Glenn Hughes 'The Voice of Rock', proudly featuring him on their international best selling hit single America- What Time is Love'.

Since 1992, Hughes has toured extensively in Europe, Japan and South America in support of solo albums such as Blues, From Now On…, Feel, Addiction, The Way It Is, Return Of Crystal Karma, Building The Machine, Songs In The Key Of Rock, Soul Mover and Music For The Divine. Soul Mover saw the continuation of the successful creative partnership with Red Hot Chili Peppers drummer Chad Smith that began with Glenn's live DVD Soulfully Live in the City of Angels (2004). Soul Mover was voted 12th best album of the year by highly influential UK magazine Classic Rock.

This year is one of the most exciting and prolific years in Glenn's career as it has seen him recording and touring in a new supergroup project, Black Country Communion with guitar star Joe Bonamassa, keyboard player Derek Sherinian (Dream Theatre) and drummer Jason Bonham, son of the late Led Zeppelin legend John Bonham. The band release their first album Today, September 20th, 2010. Produced and mixed by Kevin Shirley (Aerosmith, Iron Maiden, Black Crowes, Page and Plant, Journey etc), this will be another world-class musical statement that will raise the bar for rock singing yet again.

Glenn originally used Laney amplifiers with Trapeze in the early 1970's. Coming full circle, Glenn will be using Laney Nexus Tube heads and NX810 cabinets on his 'The Voice of Rock' solo tour and also with Black Country Communion.

"The crazy thing is, I've been looking around for the right bass equipment for 10yrs and all along, my dear old friends at Laney have been developing the perfect GH sonic amplification experience. This rig is amazing, exhilarating…I've gone back home, to the Black Country and Laney