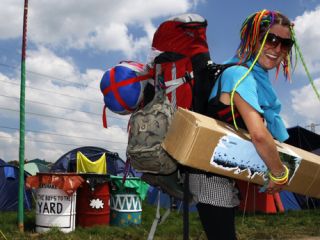 Time to let your hair down? © Luke MacGregor/Reuters/Corbis

On 23 June, Glastonbury Festival 2010 opens its superfence to 137,500 rockers, ravers and Stone Circle-worshippers praying for blue skies. And it's tradition here on MusicRadar for at least half the team to go - and pray - along.

However, Glasto is "the largest open-air music and performing arts festival in the world", and as dedicated as we are to bringing you all the Michael Jackson RIP T-shirts (less than 24 hours after his death), mankini-clad campers (2009's answer to the jesters' hat) and token shots of crazy people running around onstage performing music, we can't cover it all.

And that's where you come in…

We need your pictures!

If you're braving Glasto this year, we need you to send us your photos. From last-minute packing, Pilton road gridlock and figuring out how to get your nan's overloaded shopping trolley to that nice camping spot by the Park Stage, to the festival's best falafel, glow sticks in The Glade and the obligatory mud bath - we want them all.

Send us your photos, along with a short caption about what/who you've snapped and your name so we can credit you, like this:

We'll select the best (and worst) and create the ultimate fan's-eye gallery of Glastonbury Festival 2010. We'll use your captions (within reason) and, of course, credit your good selves for being the intrepid roving reporters that you are. See you there!