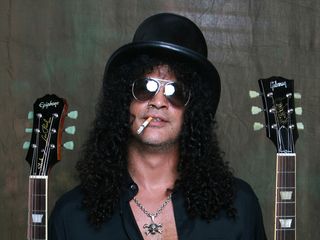 We suspect that this man may be a rock star

Just days after announcing that its range of Slash signature Les Pauls is to be joined by a Epiphone Les Paul Goldtop, Gibson has revealed that a full-on USA model will also be available worldwide from 7 October.

Even more limited than its Epiphone sibling, there will be just 1000 Gibson USA Les Paul Slash Signature Goldtops manufactured.

Like the Velvet Revolver and former Guns N' Roses star's other recent signature models, the instrument features such pro-level additions as TonePros locking hardware, a Plek system set-up and a hybrid neck profile that combines the roundness of a late-1950s Les Paul neck with the slim feel of those of the early 1960s.

Slash's favourite Seymour Duncan Alnico Pro-II humbuckers complete the £1499 package, which Gibson assure us won't be repeated once the first 1000 are sold out. Get one while they're still smokin'…