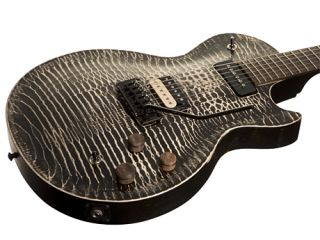 After a low-key launch bereft of bells and whistles at NAMM, the availability of Gibson's latest stripped-down Les Paul BFG has been announced ahead of Frankfurt Musikmesse 2011.

The Les Paul BFG With Tremolo - or vibrato for fans of being correct - shares many of the appointments of the previous BFG models but throws a Schaller vibrato tailpiece with roller saddles into the mix for super-smooth performance.The idea of a Les Paul with any vibrato other than a Bigsby will always be too much to stomach for many traditionalists, but here's what Gibson has to say:

"Players from all corners of the rock camp have come to appreciate the appealing simplicity and raw power of the Les Paul BFG in its various guises. Stripped of any superfluous artifacts, yet still dressed to kill, and loaded with what might be the most appealing pickup complement available on a Les Paul, the BFG is simply rock incarnate, a guitar born to riff hard.

"Now Gibson USA has increased this instrument's versatility exponentially with the addition of a contemporary vibrato tailpiece and new 'killswitch' wiring to add new sonic potential in all directions. Dubbed the Les Paul BFG With Tremolo, it's a surprisingly powerful tool for all your rock, blues, fusion and avant-garde guitar explorations.

"The heart of the Les Paul BFG With Tremolo remains its ingenious combination of two of Gibson's most popular pickups of all time. A P-90 in the neck position yields all the biting, edgy fat single-coil tones that have made this pickup a favorite since the 1940s.In the bridge position, a BurstBucker 3 presents classic PAF-style clarity and depth, with a little extra oomph when you need it, courtesy of slightly overwound coils, which are also wax potted to avoid microphonic squeal at high volume levels.

"Both pickups are made with genuine Alnico magnets (Alnico V in the P-90, Alnico II in the BB3), and the pair is routed through a network of independent volume controls, master tone control, three-way toggle switch, and a 'killswitch' mounted in the usual upper-bout selector switch position, handy for dramatic stutter and chopper effects.

"Of course, a major part of the Les Paul BFG With Tremolo's appeal is the new vibrato tailpiece that gives it its name. Take this Schaller system in your hand and the sky's the limit for anything from tremulous wobbles to soaring divebombs, all with a smooth, fluid action and great return-to-pitch capabilities, thanks in part to a self-lubricated white GraphTech nut and Grover locking tuners that serve as the tremolo's partners in crime up at the headstock end.

"The Les Paul BFG With Tremolo pairs the carved maple top and mahogany body (chambered for improved weight and resonance) that have helped to make the Les Paul legendary since 1952, while a glued-in mahogany neck with rounded 'Studio' profile and a 22-fret rosewood fingerboard ensure optimum playability.

"While the BFG is traditionally a no-frills model with minimal adornments, a set of genuine wood control knobs adds an extra touch of class to this guitar, and the entire package looks great in a grain-textured satin Worn Ebony finish, done in hand-sprayed nitrocellulose, naturally."

US MSRP is $1,849. Visit Gibson for more on the Les Paul BFG With Tremolo.