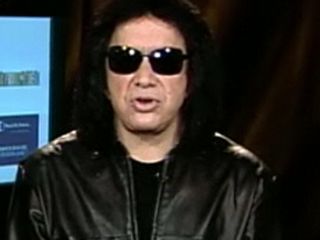 Simmons goes off on Santana

Don't invite Gene Simmons and Carlos Santana to the same backyard BBQ any time soon - if ever. The KISS bassist had harsh words for the legendary guitarist during a recent interview with FOX 5 in Las Vegas.

While discussing plans for an upcoming KISS album, Simmons used the topic to take a stinging swipe at Santana.

"It's time for us to go out and show the little boys how the big boys do it," the 59-year-old reality TV star said. "I'm sick and tired of these bands like Carlos Santana looking at his shoes and thinking that's a rock concert."

Simmons finished his tirade with this directive: "Get off the stage!"

As it turns out, there's been something of a war or words between Simmons and Santana for some time now. In 2005, Santana blasted Simmons' musical ability and labeled him "Las Vegas entertainment."

Santana went on to say said he was appalled by Simmons' music and posited that the rocker was hiding his lack of skill behind layers of cartoon clothing and makeup.

"He's not a musician, he's an entertainer," Santana said of Simmons. "A musician is (John) Coltrane, Bob Marley. KISS is Las Vegas entertainment, so he wouldn't know what music is anyway. That's why he wears all that stuff."

"A musician doesn't need the mask and the mascara," Santana continued, "so there's a difference between an entertainer and a musician."

Undoubtedly, Simmons' recent attack on Santana will only fan the flames of this feud. You can watch a video of the KISS bassist going off here.

It should be noted that we at MusicRadar have seen Carlos Santana in concert on numerous occasions. While he did periodically glance down at his guitar while performing, at no time did we catch him admiring his fancy footwear. Maybe Simmons caught a show we didn't.