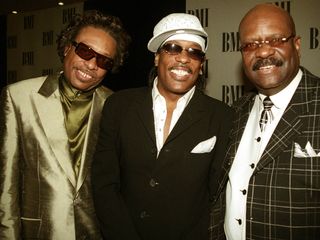 Robert Wilson, bassist and founding member of The Gap Band, died Sunday (15 August) of a heart attack at his home in Palmdale, California. He was 53 years old.

Often referred to as the 'Godfather Of Bass Guitar,' Robert formed The Gap Band when he was just 14 with his brothers Charlie (vocals) and Ronnie (drums, keyboards) in the late '60s in their hometown of Tulsa, Oklahoma. Originally, they were known as The Greenwood, Archer And Pine Street Band, before they shortened the moniker to The Gap Band.

The funk group scored a 1982 pop smash with the song You Dropped A Bomb On Me, but their string of hits extended from the late '70s all the way until the mid-'90s with songs such as Burn Rubber On Me (Why You Wanna Hurt Me), Humpin', Big Fun, Early In The Morning, Party Train and Beep A Freak.

"My brother Robert was a bad boy on the bass," Charlie Wilson said in a statement. "We shared a bond as brothers, musicians and friends. I loved him and losing him is difficult for both Ronnie and I. The music world has lost a very talented man."

Robert Wilson is survived by his wife, Brenda, and their two daughters, Robin and Latina.