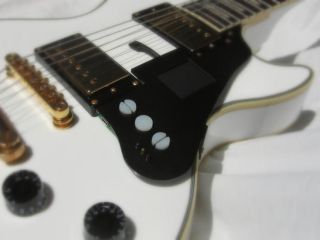 PRESS RELEASE: With FreePlayer guitarists can control VST and MIDI effects dynamically, by motion and touch, as part of their performance.

It sounds like science fiction - a guitar that knows where it is, and responds to the motion as you play it. Or a guitar that knows where you are and responds to the motion of your hands near the strings? But with FreePlayer it's a reality, and what's more it's not just a computer boffin's plaything, but a real musician's tool - built from the ground up with the player in mind.

"The problem with effects is still that you control them with foot pedals - and how expressive is your ankle?!" says Stuart Smith, Director of FreePlayer Ltd. "Have you ever wanted to reach down to your effects pedals and turn the knobs while playing? Well, with FreePlayer, you can do just that."

"Slide your pick across the touchpad to perform a full octave pitch bend. Shake the neck slightly, and a cloud of brilliant reverb appears. Move your hand near the strings, and you're controlling a wah-effect. You can control everything, switch presets, directly from the guitar itself. And that's just the beginning. By allowing the player dynamic control of multiple effects, FreePlayer opens up all sorts of new sound possibilities."

FreePlayer consists of a hardware attachment for the guitar and a software application that hosts VST plugins and controls MIDI devices. A Windows version is offered initially, with other operating systems to follow. An on-line community - the SoundStore - will allow users to share their sounds.

The FreePlayer hardware is an 'easy-fit-kit' for Strat or Les Paul-style guitars (with other models to follow) that contains various motion sensors, a touchpad (or joystick option) and buttons, which allows the player to manipulate multiple effects smoothly and dynamically, in real time. The software offers a musician-friendly editor, plus a stripped-down play-only version, ideal for live work.

FreePlayer Ltd. is very proud to announce that FreePlayer is available to Pre-order. Customers Pre-ordering FreePlayer between now and the product release (expected end of July) receive a discount of up to €100 - with deposit of just €50.

The first models to be made available are:

FreePlayer Express - pre-order price €149 (normal price €199) - a universal kit that attaches to most guitars or basses with a simple adhesive pad (included). With a 3-axis Motion Sensor and Tactile Button array, it's all you need to get up and running!

Each FreePlayer unit comes with a USB cable, the FreePlayer software, and is bundled with these VST plug-ins:

Users will be able to download more VSTs and sounds from the FreePlayer SoundStore, including Saltline Audio Solution's previously announced range of plug-ins developed specifically for FreePlayer.