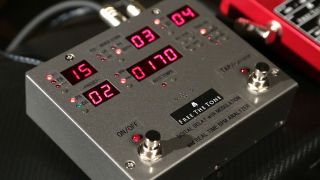 You'll be able to get your hands on one of these beauties come September 2014.

High-end Japanese effects brand Free The Tone will be releasing an innovative Digital Delay pedal later this year. A prototype has been unveiled in a video with UK blues guitarist Matt Schofield, currently on tour in the UK and Europe.

We contacted Free The Tone boss, Yuki Hayashi, to find out more. He confirmed that the pedal was nearing final prototype stage, and that the final version, due September 2014, will have a slightly different chassis, featuring a sloping enclosure.

The programmable pedal has readouts in either milliseconds or beats per minute and includes various modulation options on repeats. It also has an innovative BPM tracker that can automatically adjust delay times by up to +/- 20 per cent to sync with your music.

Matt told us: "You can always hear the fidelity in Yuki's pedals. There's so much headroom, and it doesn't get in the way of the rest of your sound - it's a really great sounding delay, and I'm looking forward to getting the final version!"

You can hear a couple of the new pedal's sounds in the video on Facebook, demonstrated by Matt Schofield through a Two-Rock Crystal amplifier and, interestingly, also using his latest MS SOV Standard pedal from Free The Tone. There is a longer video on the way, according to both Schofield and Yuki Hayashi.

For more information visit the official Matt Schofield and Free The Tone websites.