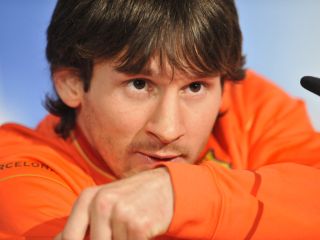 Lionel Messi is such an Oasis superfan that he's formed an Oasis tribute band. And not only that, but the Argentinian football star plans to take his group on a tour through Europe.

Messi, whose day job consists of playing for Spain's FC team Barcelona, is the 'Noel Gallagher' of the band. According to he Sun, one of Messi's team mates is also in the group, playing frontman Liam, but Messi doesn't want to divulge his identity as of yet.

Apparently, the sports superstar takes the act quite seriously. "Our disguise is based on how Oasis looked in the mid-'90s," he said. "We have our wigs, clothes and glasses sorted. I also spent a lot of time getting the mannerisms right."

He's not shy when it comes to his unnamed band's abilities to deliver the musical goods, either - the 23-year-old has invited Noel Gallagher to see them play. "We'll visit the UK. If you're at a pub or club where we are performing and see past our disguises there'll be a decent prize in it for you," Messi said.