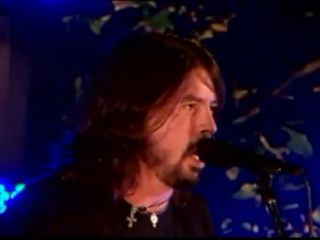 Dave Grohl rocks the White House lawn on the Fourth

Dave Grohl and Foo Fighters couldn't argue with their view of the Washington DC fireworks on Independance Day - they were on stage on the White House lawn as they were happening.

The band played a blazing set as part of a concert called Salute The Troops, put on by the USO. The show, which also featured Michelle Branch and comedian Jimmy Fallon, was planned in honor of the hundreds of military service members who were in attendance.

New song to be part of 'greatest hits' set

Grohl used the occasion to unveil a new Foo Fighters song called Wheels, which he described as "the feeling when the wheels touch the ground and you're like 'Oh, God, I'm glad that's over with, man!'"

The studio version of Wheels will be one of two new tracks the band has recorded with producer Butch Vig specifically for a yet-to-be-titled greatest hits collection due out this November.

The Foos wrapped their set by dedicating the song My Hero to the service members in the crowd. Grohl commented that he grew up in nearby Virginia, and never thought he would be playing at the White House. "I think a lot of dreams are coming true tonight," he told the cheering crowd.