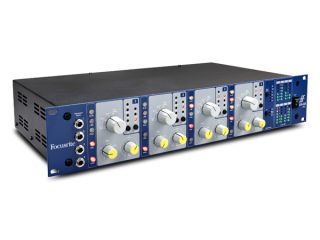 PRESS RELEASE: New to Focusrite's renowned ISA range of pro audio hardware is the ISA428 MkII, a premium four-channel mic preamp and A-D converter. The ISA428 MkII will supersede the existing ISA428 and will be available at a much more affordable price.

Like its predecessor, the ISA428 MkII features four of Focusrite's transformer-based ISA preamps. These are the same as those found in the legendary Forte console, used on countless hit records over the past two decades, and highly regarded among the studio recording fraternity. Each channel has phantom power and phase-reverse controls, plus switchable input impedance and an adjustable high-pass filter.

Mirroring the feature set of the original model, the MkII also has an optional eight-channel A-D converter upgrade, which converts signals from the preamps and an additional four line-level inputs to 24-bit digital data streams at sample rates of up to 192kHz. New to the ISA428 MkII is a switched-mode power supply, which lowers the internal noise and heat output of the unit, and greatly reduces its weight —ideal for touring companies and mobile recordists.

When designing the ISA428 MkII, the Focusrite R&D team were determined to maintain the pristine sound quality of its predecessor, but introduce it at a new level of affordability that appeals to a more diverse range of users. To that end, the exact same analogue circuit board can be found in both the original and MkII derivations of the ISA428.

The most noticeable difference is the removal of the large moving-coil peak meters of the ISA428. Metering duties on the MkII are handled by per-channel, six-step LED bargraph displays, which monitor the signal prior to the A-D stage, providing an accurate status of the preamp's output level. Also removed is the soft limiter feature of the ISA428. In light of this, precise calibration figures are supplied in the user manual, to enable accurate system setup.

Speaking about the development of the ISA428 MkII, Focusrite's Director of Product Strategy Rob Jenkins commented "More and more people are making high-quality recordings outside the traditional studio environment, and they have different requirements to recording studios: they want the same high-quality audio, but in a simpler package. So the objective with the ISA428 MkII was to create a leaner, more cost-effective design that maintained the Focusrite sound. The new power supply helped us achieve this, and it actually runs cooler with less noise and interference than the previous model."

Switchable input impedance
Lets you change the input impedance, allowing you to match your mic to the preamp Features the 'ISA110' setting to provide the sound of the Forte's ISA110 module.

Hi-Z instrument inputs on each channel
Jack sockets on the front panel allow you to connect instruments quickly.

Variable high-pass filter
Uses the same high-quality circuitry as found on the ISA110 to provide adjustable filtering of frequencies between 16Hz and 420Hz.