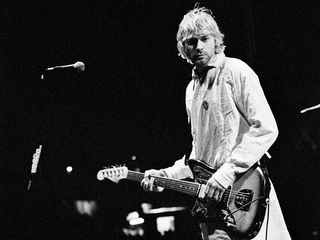 Kurt onstage with his 1965 Jaguar at the Reading Festival in 1992 (Image credit: Charles Peterson)

Last week our friends at Total Guitar revealed that Fender is set to release a Kurt Cobain Jaguar to coincide with the 20th anniversary of Nirvana's landmark Nevermind album. Now Fender has released the official word on the guitar, along with details of a special competition for UK Nirvana fans.

"Fender is very proud to introduce one of the most distinctive signature models in its history, the Kurt Cobain Jaguar guitar, meticulously modelled on the battered 1965 Jaguar that the Nirvana singer, guitarist and songwriter wielded during the heady and meteoric early-'90s era when the band burst out of the Pacific Northwest, ruled rock and led a musically stunning and culturally subversive movement.

"Fender craftsmen have reproduced Cobain's battle-hardened left-handed Jaguar down to the last unusual detail, including its worn finish, dual humbucking pickups and unique electronics and controls (which were already in place when Kurt acquired the guitar in summer 1991).

Head over to www.fender.com/cobain to find details of a competition to win the guitar and a limited run four-LP 20th anniversary edition of Nevermind.

Visit Total Guitar for more images of the guitar and details of a very special upcoming feature that tells the full story behind the Kurt Cobain Jaguar's development.