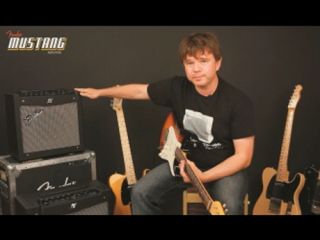 There's no bigger name in the world of guitars than Fender. Back in the 1940s, with the planet reeling from war and rock 'n' roll still a decade away, Fender pretty much invented electric guitar amplification as we know it today.

Designs like the Bassman, Deluxe and Twin Reverb that the company perfected in the '50s and '60s are still seen as the high watermark by tonehounds, with vintage examples commanding the kind of prices that only the privileged few can afford to shell out in these troubled economic times.

Happily, Fender is a company that moves with the times, and not only does it know a thing or two about amplifiers, but it also knows how to deliver great tone at wallet-friendly prices. Following on from the do-it-all G-DEC 3 launched earlier in 2010, Fender's new Mustang I (RRP £108) and II (RRP £175) amplifiers are light in weight and light on price, but heavy on features.

MusicRadar's new Fender Channel is the place to go for exclusive video demos of the new Mustang amplifiers and the G-DEC 3. And be sure to bookmark it, because not only is there more exclusive content coming soon, but there might just be a mouthwatering Fender competition on its way too. Exciting times...