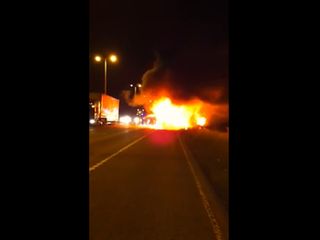 For Fear Factory, their tour bus became just that. Luckily, all survived

The members of metal band Fear Factory narrowly escaped death when their tour bus caught fire and burnt to a crisp on the M1 motorway in Northamptonshire, England this morning (5 August).

According to Metal Hammer, the band had just finished a show in Sheffield and were traveling to London when the bus driver noticed smoke coming from one of the back wheels.

Guitarist Dino Cazares said that the driver "stopped, jumped out and noticed a flame underneath the wheel well. He tried to extinguish it, but the flames were too much.

"Everyone was woken up by one of our crew yelling, 'Get everyone up and out of the bus!'" Cazares said. "Everyone grabbed [their] bags and ran off the bus. We stood on the side of the freeway going, 'Thank God we all made it out' - until someone noticed our merchandise guy was still asleep on the bus. So our good friend ran back on the smoke-filled bus and got him out just minutes before the bus was completely in flames."

The vehicle was engulfed in about 20 minutes. "Our eyes are burning and we were all coughing from the smoke," Cazares said. "Some of us lost wallets, money, computers etc.. But that's not important compared to our lives."

Later in the morning, Cazares said the band learned that their trailer, containing all of their gear, was saved. As for the bus, Cazares described it as "just a metal frame on the side of the road. They had to scrape up what was left of the bus from the road because it melted into the pavement."