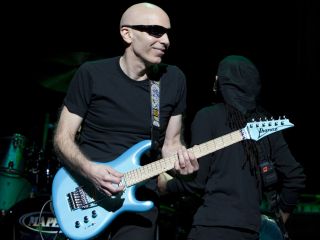 The Experience Hendrix Tour rolls on. As he did after the opening night in Santa Barbara, California, Joe Satriani blogs exclusively for MusicRadar, covering stops from Los Angeles to Chicago.

Here's one from the life-imitates-art department: During the tour's opening night show in Santa Barbara, my throat was feeling scratchy and I joked with the audience that I needed an interpreter to communicate with the crowd between songs. Now it's developed into full-blown laryngitis, and last night I couldn't even talk to the audience.

Nevertheless, it was a great show, with the high point being the song Red House, on which I was joined by Brad Whitford and Billy Cox. Brad was on fire playing through a hand-wired Marshall head, and even Billy took a solo after me as we slipped into a jazzy chorus a la 'Hendrix in the West.' The LA crowd was awesome. I only wish I could have managed a proper "Thank you!" at the end of the night.

Las Vegas! Being sick on tour is a terrible feeling. I had an in-store appearance before the show, and all I could think about was getting something to soothe my aching throat.

Just started listening to Valleys Of Neptune. While looking through the CD booklet I noticed something interesting: in all the pictures of Jimi in the studio, he's perfectly dressed. Everyone else is in T-shirts and what have you, but Jimi's got his whole look going on, even while tracking basics.

The gig was great! We played a venue called The Joint By Rogue at the Hard Rock. Brad and I really tore it up during Red House. And my set with Living Colour was the best one yet. For some reason, we played more 'out' than ever; at the same time, we were somehow tighter. The audience was with us all the way.

Again, I watched everyone's set from the side of the stage and was so amazed at the level of talent on this tour.

Mesa, Arizona. Slept seven hours straight on the bus today. I needed that!

The Ikeda Theatre. At the top of my set, I played Happy Birthday for Ernie Isley. He was so thrilled, he came running out and gave us all hugs.

Random thoughts: Eric Johnson got a standing ovation tonight. Drummer Will Calhoun was nowhere to be found at the top of my set, so we had to use Chris Layton for Third Stone. Maybe Will had an unscheduled bathroom break - I still don't know what happened. Thankfully, he made it to the stage halfway into the set. He and Chris switched right at the break, at the exact moment where the drums go all 'Elvin Jones.' (Just like we planned it. Ha!)

Before I went on, I watched the show from the side of the stage and thought, This is so cool. Eric Johnson was to one side of me, sitting on the floor and playing his guitar; Doyle Bramhall II was on my other side, just standing there, grooving to the music. I guess Rock 'N' Roll Heaven must be like this.

San Francisco, California. The Warfield Theater. Two shows for my adopted hometown. Robert Randolph and Sacred Steel have joined the tour and we now have more performers to celebrate with.

Forget what I said earlier: my first night's set with Living Colour was even better than Vegas (the Red House finale was killin'), and the second show blew away the first. The overall sound was more defined, and our playing was more cohesive. Best of all, I got to sleep at home both nights!

Reno, Nevada. The Silver Legacy Resort Casino. Eric Johnson stretched out a bit at the end of Are You Experienced, and he was masterful. Meanwhile, I had a very cool jam with Robert Randolph in the dressing room to something he was working on. It sounded absolutely fabulous.

Denver, Colorado. Did a signing session at the Musician's Superstore that was a lot of fun. Great fans. The store itself is terrific: I got to check out five mint condition-Marshall 6100 heads - very cool.

The gig at the Paramount Theatre was awesome. Can't say enough about the audience, who gave us a tremendous reception. We were graced with performances from Susan Tedeschi. Her voice soared over the band, pure and strong. It's going to be great to have her be part of the tour from now on.

After the show, there was jam in the dressing room with everybody singing and playing, banging on bottles and dishes. But to hear Robert Randolph on acoustic guitar: priceless.

Salina, Kansas. Wow! The crowd at the Stiefel Theatre For The Performing Arts was unreal. Their energy seemed to make everybody kick things up a notch. Kenny Wayne Sheppard and Noah Hunt stunned us again with such a powerful set of performances. They are in such a good spot these days and sound great every night. Last time I toured with Kenny he was 17!

Minneapolis, Minnesota. The Orpheum Theatre. Now, this was a crazy night! I never heard Ernie Isley so possessed, not only with Jimi, but his own thing. When he did Manic Depression, he just took it somewhere else. He was using modes in a cool way to get the song to keep flying higher and higher.

With Brad Whitford and Robert Randolph as onstage cohorts, my version of Red House was wicked tonight. Billy Cox sang this song like you wouldn't believe. It's such an honor to be able to play with him.

On another note, Eric, Brad and I had a good chat while doing our laundry this afternoon. Not very glamorous, but hey, we're on the road. Sometimes you gotta do what you gotta do, and laundry is one of them. We talked studios, guitars, etc. (Yes, this is what 'rock stars - most of them - really do on tour.)

Earlier, during sound check, Will Calhoun, Doug Wimbish and I jammed this whole-tone thing that was awesome. Will had his Korg Wave drum going and played over it while Doug christened the stage with high-decibel fusion. It made my day.

Chicago, Illinois. OK, I know I keep saying how this performance or that was the "best one yet," but tonight's show at the Chicago Theatre (appropriate name, huh?) really was extraordinary. Started off with another cool sound check jam of a Doug Wimbish song that had me, Doug, Robert Randolph, Brad Whitford, Will Calhoun, Scott Nelson and Chris Layton all playing a solid 20 minutes of deep groovin' fun. Note to self: We should be recording these…

The actual show, like I said, was incendiary. Watching Ernie was like going back in time to a real Jimi Hendrix set - he just has 'it.'

Living Colour brought their energy and sound to the stage and left the audience on their feet and elevated.

Eric Johnson and band walked out and played with pure artistry and dedication. Susan Tedeschi joined them on vocals for One Rainy Wish - absolutely beautiful.

Jonny Lang and Brad Whitford did a crazy version of Fire. Jonny knows how to let go like no one else on this tour. He poured every ounce of himself into his vocals and guitar playing.

Jonny and Brad were joined by Susan and Living Colour as backround singers/dancers. Vernon's moves were right out of Rowan and Martin's Laugh In! Susan then picked up the guitar and played a blistering Spanish Castle Music.

Kenny and Noah slayed the crowd with I Don't Live Today, Come On and both Voodoo Child songs.

David Hildago came out and brought with him the one and only Hubert Sumlin for what was both a music history lesson and a great set of guitar playing. David and Cesar Rosas from Los Lobos have been tearing it up this whole tour. They've been recording their upcoming record by day and playing with us at night. I can't say enough about them.

Robert Randolph and Sacred Steel took the stage for what was something like a church revival, with three screaming lap and pedal steel guitars all wailing and making you feel wonderful deep inside. They played Purple Haze and then brought out Kenny and Corey for a mesmerizing version of Them Changes.

My set kicked off and I tried something different with Third Stone From The Sun: I improvised some Dorian and Mixolydian lines with all the atonal stuff and space sounds during the fast swing sections and it seemed to focus the song in a new way - and made the band just take off. I felt so fulfilled.

Will's drumming was explosive. Doug and I somehow managed to get our space ship sound effects synchronized at the end of the song, and the impact was downright scary.

On Fire, Vernon and pulled out all the stops for a few crazy exchanges a la G2. For Watchtower, I played it just like Jimi's recorded version, taking special care to get the right tone and phrasing, just like on the record. To me, that's the only way to play Watchtower. The audience seemed to know that this is like religion for me: when I play Hendrix, I'm paying tribute and I treat Jimi's music as something sacred.

For our Red House encore, Billy brought out a 14-year-old guitarist who could really play the blues. I was looking across the stage thinking, I was exactly his age when I started…It was a great moment. The audience was on their feet. Billy sang while Brad, Robert, our guest guitarist and I poured it out for Jimi in a town known for its special relationship to the blues. It was a spectacular encore, and a wondrous night for a 14-year-old rising star whose name I later wrote down: Jemiah Rogers.