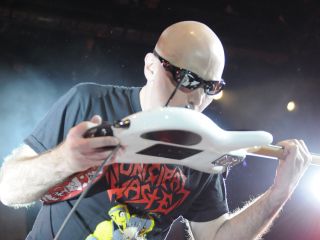 Joe Satriani has agreed to blog from the tour exclusively for MusicRadar. The following is the first of three installments:

Wednesday. I rehearsed with Living Colour today, who will be my "band" for the shows. They sounded great! Big fat grooves, monstrous jams and Corey Glover's awesome voice soaring over the top. Also caught stunning sound checks by Ernie Isley and Eric Johnson.

I'm using one of my old Marshall 6100 half stacks and a three single-coil Ibanez JS prototype guitar. It's got the coolest blue finish and a sleek maple neck.

I will spend some time woodshedding tonight, mining for new insights in familiar and much-loved Hendrix songs. Looking forward to tomorrow's show…

My God, the show! Every performer was reaching for magic and finding it tonight. Here are a few short takes on the event:

Ernie Isley took the stage first, and his performance was so powerful and moving - it set the tone for the whole evening. When he was 11 years old, Jimi lived in Ernie's house for a time. Ernie used to listen to Jimi practicing, unplugged; he heard Jimi as few ever did. Ernie connects with Hendrix in a special way, and with Billy Cox and Chris Layton on bass and drums, it's wonderful.

Living Colour exploded on stage with so much energy, all four of them giving everything they had. They are an amazing rock band to witness live. I can't believe I'm going to play with these guys!

Doyle Bramhall II had such a deep groove going on with Who Knows, it had all the women in the house moving their bodies to the beat. I saw it with my own eyes - just incredible.

Eric Johnson reached a similar highpoint with Are You Experienced. Two drummers, Will Calhoun and Chris Layton, backed him up. Eric's backwards guitar solo must be seen to be fully appreciated. It's truly remarkable.

Jonny Lang came out with a voice as big as giant oak tree and a guitar sound to match. He is joined by Brad Whitford, and together they took familiar Hendrix tracks to new heights.

Then Kenny Wayne Shepherd went all out. I haven't seen him since we toured together in…the last century! Vocalist Noah Hunt joined Kenny for a fantastic duet of I Don't Live Today. Totally rockin'!

David Hildago and Cesar Rosas from Los Lobos played beautiful versions of Little Wing and Can You See Me. Afterward, they were joined by the one and only Hubert Sumlin for Killin' Floor.

Billy Cox came back on to play Them Changes with the guys and it sounded like Band Of Gypsys Live At The Fillmore.

I ran out with Living Colour and we launched into Third Stone From The Sun, but not before a little humor: my mic wasn't working. So I used Corey Glover as a kind of interpreter to tell the audience that I found it interesting that the tour's director, John McDermott, asked me to play the one song Jimi wrote about aliens and space ships.

We all had a good laugh and then tore into the only song by Jimi that scared me when I was 14 years old. While on stage, I remember thinking, I'm in heaven playing Jimi's music. Next, I brought out Vernon to be my six-string partner on two more numbers. We connected instantly and tore it up.

Brad Whitford, Billy Cox, Chris Layton and Will Calhoun joined me for a big and sexy Red House, and with that, the night was complete for me. What a great audience. I believe they lifted us up as much as we did them. All in all, an amazing first gig. Thank you, Santa Barbara.