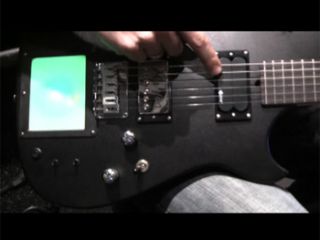 Until now, Bellamy's collaborations with Manson have been strict one-offs, with a long-standing agreement between the two that the body shape of those instruments would not be replicated. But that's all about to change…

Mansons Guitar Shop in Exeter, UK, has announced details of one of the most exciting production guitars in years: the Manson MB-1 Matthew Bellamy signature model. Easily the most technologically advanced signature guitar on the planet and based on Bellamy's own cracked mirror M1D1, the MB-1 features a sustainer circuit and an X/Y MIDI controller pad (like that on a Korg KAOSS pad) that can be mapped to control anything from a particular effect parameter to stage lighting.

When we heard about this, we had to head down to Mansons to see for ourselves. You'll be pleased to hear that we took a video camera along too. Without further ado, here's the first officially-sanctioned video of the MB-1 in action anywhere on the internet:

The MB-1 will be followed by the DeLorean later this year, which looks set to incorporate an optional Zvex Fuzz Factory beneath an aluminium fascia. For more spec, pictures and pricing info, head over to the official Mansons website, or check out the issue 316 of Guitarist magazine, in stores from 12 May.