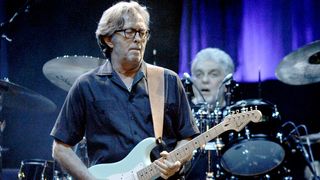 Eric Clapton's two-night Crossroads Guitar Festival, announced earlier this week, promises a jaw-dropping array talent, with over 30 of the greatest guitar players and musical acts around today. The shows, to be held at New York City's Madison Square Garden on 12-13 April, will see the guitarists playing sidemen to one another during what is described as "impromptu collaborations."

At press time, the lineup of artists is as follows:

Before those shows, Clapton and his band will play more than a dozen cities across the US starting 14 March. The tour will conclude with the two-night Festival. All profits from the Festival will benefit The Crossroads Centre in Antigua, a treatment and education facility founded by Clapton for chemically dependent people. The Festival is presented by Chase.

"The Crossroads Festival is the realization of a dream for me, to gather a group of amazingly talented musicians to perform on one stage," Clapton said. "The Crossroads performers are all musicians I admire and respect."

Since its inception, Clapton's vision for the Crossroads Guitar Festival has been to create an event where his friends and contemporaries can have fun and perform together for the benefit of a good cause. All profits from the Festival will benefit The Crossroads Centre in Antigua, a treatment and education facility founded by Clapton for chemically dependent people. The Festival is presented by Chase.

In addition to the concerts, the "Guitar Center Road to Crossroads Exhibition" will be featured on the Terrace level @ Madison Square Garden and will excite fans with an incredible guitar-centric celebration of past Crossroads Guitar Festivals. This exhibition will feature the "Legends Guitar Walk," with some of the most valuable guitars in the history of Rock and Blues, including historic guitars from Guitar Center's Legends Collection featuring Clapton's two most famous Fender Stratocasters, Blackie and "Brownie," Gibson ES-335 as well as Stevie Ray Vaughan's "Lenny" Fender Stratocaster, plus selections from Guitar Center, The Rock & Roll Hall of Fame and Experience Music Project.

Additionally, Fender, Gibson, Ernie Ball and Martin will host interactive exhibits where guitar lovers can plug in and play new products and classic favorites, while all visitors will be able to peruse memorabilia and watch archival footage of once-in-a-lifetime performances from prior Crossroads festivals on video walls throughout the exhibition. The "Road to Crossroads Exhibition" will open at 6:30pm on Friday and 6:00pm Saturday, and is free to all ticket holders.