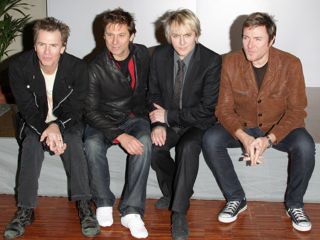 With Amy Winehouse apparently sidelined from the studio, her producer Mark Ronson is keeping very busy living out his childhood fantasies by working with Duran Duran on their next album.

Duran Duran singer Simon Le Bon announced the collaboration on the band's blog, in which he stated that the group was trying to bury the memories of their unsuccessful Justin Timberlake/Timbaland-produced 2007 album Red Carpet Massacre.

"OK you've guessed it," Le Bon writes, "we're moving in a different direction with these guys than with Timbaland and Justin T. It feels very good, I have to say. MODERN ENGLISH ROCK is what it's all about for us."

A Kaiser Chief, too

By "these guys," Le Bon is referring to Kaiser Chiefs drummer Nick Hodgson, whom Ronson has enlisted to assist with the songwriting process on the group's 13th album. The producer claims that they managed to hammer out at least three new songs within the first six hours of jamming.

Le Bon, for his part, is ecstatic. "We have had such an inspired session so far. In the five days we've worked, we have seen the nuts of eight new songs starting to grow on our tree. It's daunting enough for me to know where to start if I'm honest."

Duran Duran and Ronson first got together last year to re-imagine some of the band's hits (not to mention Blur's Song 2) for a one-off concert in Paris. (Check out the video below).

Of the show, Ronson enthused, "I was really fucking nervous. Duran Duran are one of my favourite bands. This has to be one of the highlights in life for me. It's pretty fucking surreal."