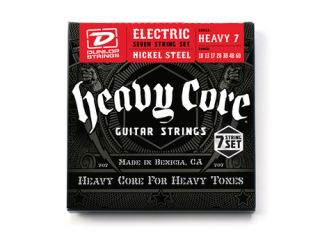 Heavy Core Strings are uniquely designed for the player who tunes low and plays hard, built with a heavier core wire for players to really 'dig in' while retaining definition and punch without modifying their instruments.

The Heavy Core Seven set was specifically developed for tonal balance and superior intonation when using standard B, B with dropped A and half-step B flat tunings.

The Heavy Core Seven set, like all Dunlop strings, are 100 percent manufactured in Benicia, California where we take great pride and care in offering players the finest, USA-made strings available. Packaged using corrosion-inhibiting VCI Fresh Technology so you get the freshest set of strings every time. Now shipping.