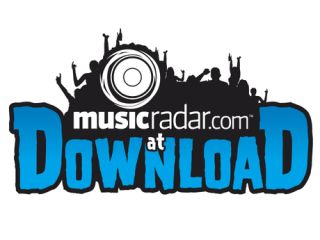 The bands rocked hard, the crowds went wild, but best of all, it didn't rain. 2009 was a vintage year for Download and MusicRadar, Rhythm and Total Guitar magazine were there to capture the sounds, sights and smells in words and on camera.

We've got a video camera and we're not afraid to use it. That vehicle pass will come in handy too.

Where the hell has all this traffic come from? Anyone would think there was a massive rock festival on this weekend...

Barely a note has been played, but already the wheels of the media machine are turning. More interviews than you can shake a skull on a stick at...

By lunchtime on Friday the celebs are out in force. Korn present a united front at their press conference.

The Blackout's Gareth Lawrence reclines on the couch with Rhythm. Check out the video interview.

The Crüe draw a big crowd on Friday night and promise to come back next year.

It's Saturday morning and Omar from Fightstar is eating Rhythm for breakfast.

A bleary-eyed You Me At Six hang on to Total Guitar for dear life.

Tempers fray in the press area.

Burlesque dancers: an integral part of any festival.

After an awesome, career-spanning live set, Chris Cornell stops by to talk songwriting with Total Guitar. Check out the exclusive behind-the-scenes video.

The food at the hotel was so good we ordered a pizza.

Steel Panther get their guns out for Sunday's busiest press conference.

Keith from Buckcherry gets his riffs out for Total Guitar.

TG, Rhythm and MusicRadar take time out from interviewing and filming to pose for the camera. Look at how lush we are.