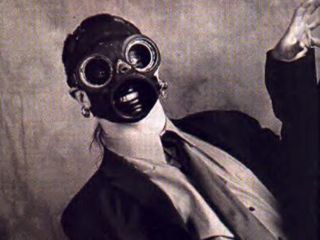 It was the kind of opening show Slipknot DJ Sid Wilson (#0) will never forget. After finishing a bang-up set at the first date of the Rockstar Mayhem Festival Tour in Auburn, Washington on July 9, Wilson leaped off the stage - breaking both of his heels.

Now wheelchair-bound and sporting casts on both legs, Wilson has vowed to soldier on and perform all shows. And judging from his video clip shot during the Slipknot's set in Devore, California on July 13, Wilson is a man of his word.

Somewhat fittingly, Wilson is nicknamed Psychosocial Sid (did he inspire the group's latest single?) for his colorful antics. But we have a pretty good hunch that #0 is going to go easy on the jumping from now on.