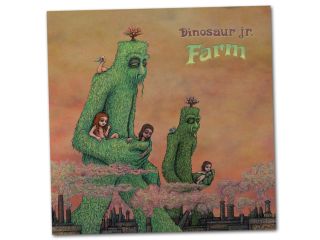 European copies of Dinosaur Jr.'s latest album, Farm, have been recalled by the band and their label PIAS.

The CD was duplicated incorrectly, resulting in a 3dB increase in volume. Welcome (back) to the Loudness War…

"Please note that on the European CD version of the Farm album there is an audio problem. This occurred while duplicating the original master in a duplication studio. The problem occurred when the duplicate was produced, as the software program used for this duplication 'doubled' the sound layers. This resulted in a 3dB increase in the overall sound volume."

"If you have bought a CD of Dinosaur Jr.'s Farm album in a European shop with the bar code number 5414939004926, and you would like to exchange it with a good version, please go the site mentioned below…(details here)"

You might remember 2008's most infamous release (allow us to jog your memory), Metallica's Death Magnetic. Infamous because it was mastered incorrectly, resulting in excessive clipping, described by the mastering engineer Ted - "I'm not proud to be associated with this one" - Jensen as 'brick-walling'.

The difference, of course, is that Dinosaur Jr. have openly admitted to their mistake, and have offered a full exchange. While Metallica's Lars Ulrich (despite the signatures of 12,000 unhappy fans) remains in denial: "there's nothing up with the audio quality. It's 2008, and that's how we make records.