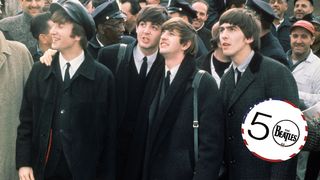 THE BEATLES IN THE USA: "A friend of mine brought home the record Meet The Beatles. We were living in Chicago at the time, over a grocery store, working Old Town North and Mother Blues - folkie places. I put the record on and was just knocked out. 'Oh, my God, that's good!' It was so different from anything else, so fresh and fun. It was exciting.

"Watching The Beatles on Ed Sullivan was wonderful. I was shocked… in such a good way. Of course, none of us had seen that kind of reaction from kids before, not for anybody. I think most people were amazed at the reaction, the screams and the hysteria. How could you not be?

"I was amazed, too, but more so by the sheer musicality of it and The Beatles' ability to project what a confident, joyful and beautiful band they were. I'd never seen anything like them before - or since. But, you know, it's always about the music. Those guys could really play and sing. They had the goods. And they really had the songs.

"Up till then, I was a devotee of Pete Seeger's - bless his soul. I wanted to be a folkie. I liked pop music because of The Everly Brothers, but seeing The Beatles made something else click. It changed my life. They changed my life. Let's be very specific about that.

"I went to see A Hard Day's Night with Roger [McGuinn] and Gene [Clark] - I was with them at this point - and that was it: We knew exactly what we wanted to do. It probably blew my mind more than Ed Sullivan. The whole movie was magic. I'm told that I came out of the theater, grabbed a stop sign and swung around it like I was pole dancing. I was just so happy. It was like, 'Oh, man… I know how to do that! We can do that!' After that, we got Chris [Hillman] and Michael [Clarke], and things came together fast.

"We took our guitar cues from The Beatles - I had the Tennessean, the Country Gentleman, and Roger had the Rickenbacker. My whole attitude was, 'If it's good enough for George Harrison, it's good enough for me.' I wanted to be like George, but I couldn't play like him. He was a great, great guitar player.

"We became friends with The Beatles when we went over to England. We had a horrible promoter, who was trying to sell us as 'America's answer to The Beatles,' which was nonsense. There was no answer to The Beatles. Nobody could cut it with them - nobody. But they liked American groups. They liked the Beach Boys, and they loved The Byrds. They told us so.

"They were all so wonderful and kind to us. And they knew that we weren't America's answer to The Beatles - it wasn't tough for them to figure that out. But they liked that we were willing to push the envelope. They would come to the gigs - and they were terrible gigs, some of the places we were playing. The guys would say to us, 'How did you even wind up here? This is horrible!' Paul would drive me home in his car after a show, and we'd talk. George would invite me over for dinner. Actually, George was the one I connected with the most. He was my best friend in that band, although I'm still really good friends with Ringo.

"We all loved Dylan, and so we had that in common. Because of Bob, The Byrds were able to put some of the first good poetry on the radio. Up until then, it was all 'moon, June, spoon. I love you, baby' and all that. The Beatles were way into Dylan. They had very good taste, very good ears. They thought he was terrific, but they also knew that they weren't gonna sing his songs. They had another direction to go."