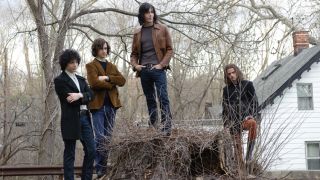 Sopranos David Chase returns to suburban New Jersey for his feature-film debut, Not Fade Away. But although James Gandolfini appears as a patriarchal figure in this vivid and moving coming-of-age drama, it's not set against a mob family backdrop. Rather, the picture, which begins in 1964 and progresses through most of that decade, concerns itself with the impact that the British Invasion had on Jersey teens, who, ignited by the appearance of The Rolling Stones on their TV sets, pick up guitars and start forming their basement bands.

Chase teamed with another Sopranos alum, the E Street Band's Steven Van Zandt, to put the onscreen band The Twylight Zones (led in the film by John Magaro and Jack Huston) through their paces. Painstaking attention to musical accuracy pays off in the actors meticulously nailing their musical moves, and it's also represented in the instruments they play.

Aiding Chase and Van Zandt in placing period-perfect guitars, drums and other gear in the The Twylight Zones' hands was Andy Babiuk, noted vintage instrument expert and author of such highly regarded books such as Beatles Gear and the upcoming Rolling Stones gear, who also runs his own boutique shop, Andy's Fab Gear. Babiuk served as Associate Music Supervisor and Technical Consultant on Not Fade Away. We spoke with him recently to discuss how he helped Chase and Van Zandt in capturing this brilliant evocation of 1960s rock 'n' roll yearning.

How did you get involved with the film?

"It was through Steven Van Zandt. He and I go back a while. My band, The Chesterfield Kings, was on his record label, and that's how we got on The Sopranos. We played in Adriana's bar in an episode of the fifth season. Plus, I had written The Beatles Gear book, which David has a copy of.

"One day, I got a call - this was while David was still working on the script - and it was Steven, asking me questions like 'In 1962, would a guy have a Country Gentleman?' I said, 'Kind of unlikely. They weren't really popular until The Beatles hit in '64. Why?' And he would say, 'Ah, I just need to know. I'll call you later.' I didn't know what was going on.

"Later on, he called me and told me that David was working on a film, that it was about a band in the '60s, and he wanted to make sure that everything was right. So that's where it all started rolling. Next thing I knew, Steven was asking me, 'They might need certain guitars for various scenes. Would you be able to get them?' That's when I had the prop people calling me to track things down."

"Fortunately, I have a lot of connections in the music industry, especially when it comes to vintage guitars and amps and stuff, so I told Steven that I could work with various companies or find vintage equipment. Everything that was used in the film had to be historically accurate, but the stuff had to work too because the actors were going to be playing. It was pretty involved. I had to get a ton of gear together.

"Occasionally, somebody would say, 'Why can't we use this?,' referring to a certain guitar, and I would have to say, 'They didn't make it yet.' There was one time where the prop guys got a Wurlitzer plastic top electric piano. The only problem was that the shot was supposed to be several years earlier than they started making those things. There was some back and forth like that. But David and Steven wanted me to make sure everything was accurate. The idea was that when a musician sees the film, he'll say, 'Wow, they really got it right.'"

In the script, did it say things like "Gretsch G6118 Anniversary model," or was it more vague? Seems like it was the latter.

"In some cases, David was very specific about wanting them to play a certain thing, because you have scenes where the actors refer to a Zildjian cymbal and stuff like that. Or there will be a mention of a Rogers Swiv-O-Matic or a Gibson GA-40. David was very adamant; he just liked the way it sounded - 'I've got a Gibson GA-40 amp.' The only problem was, those amps are really hard to get. They don't make them anymore - they don't even make reissues. So we had to go out and find originals. We had to locate pairs of everything.

"David wanted a white Gretsch drum set in white marine pearl. They don't make anything like that, and even if they did, the hardware would be all wrong - it'd be too modern looking. So we had to source out a really good Gretsch set in a certain condition so that it would look correct in the film. It was a pretty aggressive approach. We even went right down to the microphones, the stands, the cables. The detail was pretty intense."

"For the scenes in the recording studio, the prop master and the scene director found a studio in New York City. They sent me pictures of it, saying that it was all vintage gear, but when I took a look I realized that, yes, it was vintage but the wrong era! [Laughs] It was '70s equipment, not '60s, and truthfully, a '60s recording studio would have looked like a '50s radio station.

"I found all the vintage equipment and had it brought in. We had tube amps, reel-to-reel machines, an old mixing desk, old speakers, old RCA mics. They built a soundstage to look correct, we put all the gear in it, and it looked terrific. We even got the VU meters to work with the beat of the music - there was a guy behind the set touching a wire to a nine-volt battery to match the rhythm. Little wacky stuff like that, but it was really important when you're doing a period piece.

"It took some doing. A lot of the equipment was on loan. We worked with a company called History For Hire, and we had to rent some of the stuff. You just couldn't find it otherwise. They literally had to fill a truck full of recording equipment for a scene we did in New Jersey. Boy, it looked great, though."

I'm a little curious about some of the instrument choices. The guitars and drums in the film are all high-end models of the era - there were no Silvertones and other cheap brands.

"There is a Danelectro Longhorn bass in there. That was part of the conversation with had with David. He said he remembered a guy with a Country Gentleman, and I told him that it was one of the most expensive guitars for that time, next to a White Falcon. But he reasoned that the kid comes from a middle-class family, and he would have that. He wrote the script very specifically to what he envisioned. That's where I came up with the green Anniversary Gretsch - it wasn't the real expensive one, but it wasn't cheap either.

"With the actor who plays the white Fender, if you walked into a music store in '62, you'd see the Jaguar or Jazzmaster, which Fender came out with to be the new versions or upgrades of the Strat. All the surf bands were using those."

Guitars are certainly expensive these days, but in mid-'60s prices, what were the kids spending back then?

"The Strat was, what, $239 in 1960, so it was still under $300. The Gretsch Anniversary was something like $289. It's still a lot of money in the '60s, which I did say to David and Steven. David was pretty clear that the characters would be playing those models, though, and you have to respect his feelings for the time.

"Steven and I were on the phone a lot about these things. He comes from that era, and he certainly knows his stuff, but he knows that this is my field of expertise, so he said, 'Andy, just make sure it's right.' And they had me on the set too, so any time there was music being played, I was keeping an eye on the whole thing. If you're a real guitar geek, you're going to watch this and say, 'Yep, it's totally accurate.'

Magaro sings into a RCA BX studio microphone. To his right is a RCA 77DX mic. © Barry Wetcher / Paramount Vantage

How easy was it for kids to get these instruments back then? There weren't Guitar Centers in every city. I have to imagine that access to guitars and gear could be a problem.

"Hence the scene at Manny's. They got a vacant building and rented it for a week or two - they built the front of the store there. If you noticed, there was a lot of orchestral instruments, which is what the stores specialized in back then. We found some old catalogues and fashioned the front after what we saw, with lots of band instruments and clarinets and things.

"In 1964, combo equipment for rock bands was still a new thing. That's why the band, being from New Jersey, had to go to Manny's in the city. Manny's was one of the first dealers for Vox amps."

How did the actual music the band in the film played affect the choices of instruments?

It's very much a Stones-leaning film. There's even the scene with the Stones appearing on Dean Martin's TV show. Dean wasn't nice to them - he kind of dissed the band.

"Yeah, yeah. Dean basically mocked the shit out of them. [Laughs] It wasn't cool, but in a weird way, it helped the Stones' image of being the bad boys and not accepted by the older crowd. David remembered that too. He got it all down."