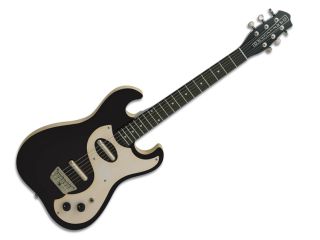 Forty-five years ago, people could actually afford gas. The Beatles had conquered Britain and were eyeing the States. And a funny-looking guitar burst onto the pages of the Sears catalog.

Danelectro's "1449" would soon become the guitar of choice for garage twangers and pros alike. Aside from its so-unhip-it's-hip appearance, it had a tone all its own, the result of its unique "lipstick tube" pickups.

In 2008 the Danelectro 1449 is back, only now it's called the Dano '63. Featuring the same lightweight body and hollow inner chamber which makes Danelectros practically vibrate with life when cranked up to high volumes, and, of course, the same lipstick tube pickups, it comes in a variety of fun "retro" colours such as Aqua, Keen Green, Peach, as well as the ever-popular Black.

At a list price of $299 US, it won't wreck your savings account to find out what players such as Link Wray, Pete Townshend, Elvis Costello (who appeared in a couple of Danelectro ads back in the day), Dave Navarro, and even Jimmy Page have known for years: the Danelectro sounds like no other guitar in the world.

Curious to see Pagey with a Danelectro? Check out this cool Led Zeppelin YouTube clip of "White Summer" in which he gives his Dano a righteous Hammer of the Gods workout.