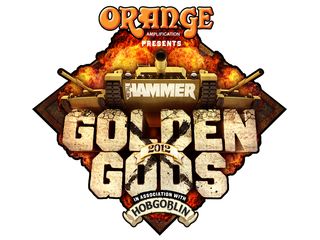 To celebrate the 10th anniversary of the Metal Hammer Golden Gods, we are giving you the opportunity to win an Orange Micro Crush PiX amp.

2012 looks set to be the biggest Golden Gods award ceremony yet. Chris Jericho will be the host for the evening, as well as playing on the pre show party boat HMS Hammer with his band Fozzy.

Along with the usual debauchery, that sees fans rubbing shoulders with the bands, there will also be live performances from Anthrax, Ghost and Biohazard with more to be announced.

Orange Amplification is the headline sponsor for 2012 and we have two of their Micro Crush PiX practice amps to give away to two lucky readers.

These compact amps pack plenty of punch with classic Orange style and tone, and come complete with headphone out socket, volume, tone and overdrive controls.

The Metal Hammer Golden Gods will be taking place on Monday 11th June at the IndigO2 in London's O2 Arena. Voting is open at http://goldengods.metalhammer.co.uk until Monday 21st May.

For more information on Orange Amplification visit their site.

To be in with a chance of winning one of two Orange Micro Crush PiX CR3 practice amps, simply answer the following question...

Which of the following Orange acts is nominated in the Best UK Band category of the 2012 Metal Hammer Golden Gods?

A. TRC
B. Skindred
C. The Defiled

Competition closes next Friday 25 May