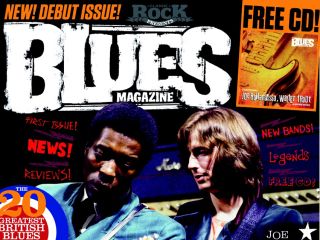 A new magazine focussing exclusively on blues and blues rock music has been launched by the team behind Classic Rock magazine. A mix of old and new; cult and mainstream, it celebrates 75 years of great blues music.

Here's what's inside the first issue:

- Joe Bonamassa talks through his new album, Driving Towards The Daylight

- The former Dr Feelgood legend Wilko Johnson in full flow on his blues roots, his glory days - and his new biography Looking Back At Me

- Walter Trout opens up on his past and talks about his excellent new album, Blues For The Modern Daze

- A definitive Buyer's Guide to the Godfather of Chicago Blues, Muddy Waters

- The most comprehensive blues reviews section anywhere in the world…and a soul food recipe to prepare and eat whilst you're reading - yes, really!!

If you like the blues, you'll love The Blues magazine, available in all good newsagents. Alternatively, head here to order online through MyFavouriteMagazines.

Buy a copy of Classic Rock presents: The Blues magazine