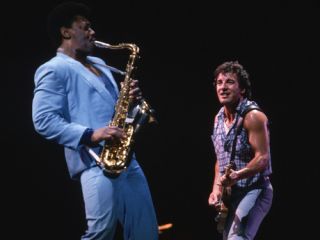 Clarence Clemons, saxophonist for Bruce Springsteen And The E Street Band, who suffered a stroke at his home in Florida yesterday (12 June), has had two brain surgeries but is "responsive and in stable condition," according to the Springsteen fan website, Backstreets.com.

While we await official word on Clemons' condition, Fox 5 News reported that the musician is paralyzed on the left side of his body. Backstreets quoted a 'close friend' of Clemons as saying, "Yesterday, it did not look good at all. Today...miracles are happening. His vital signs are improving. He's responsive. His eyes are welling up when we're talking to him. He was paralyzed on his left side, but now he's squeezing with his left hand. This is the best news we've heard since [the stroke] happened — it's nothing short of miraculous. The next five days will still be critical. But he's a fighter."

Despite this bit of good news, Showbiz411 reported today that members of the E Street Band "were advised to get down to Florida as soon as possible."

Clemons is an original member of the E Street Band, and at 69, he's the oldest, too. Affectionately nicknamed 'The Big Man' because of his imposing physical presence, his wailing solos on songs such as Born To Run, Jungleland and Badlands have made him an audience favorite for years. Well aware of Clemons' popularity, Springsteen has always saved the saxophonist for last during band introductions at concerts. In fact, the song Tenth Avenue Freeze-Out chronicles the union of Springsteen and Clemons: "When the change was made uptown and the Big Man joined the band/From the coastline to the city all the little pretties raise their hands."

Although the E Street Band is currently on break, Clemons has stayed active, performing on Lady Gaga's new album, Born This Way. In a tweet this morning, Gaga wrote, that "my very close friend + musician on The Edge of Glory, Clarence Clemons is very sick. Can we all make some get well videos?"