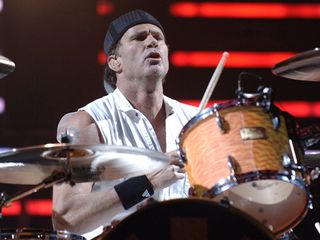 Chad Smith behind the kit during the Red Hot Chili Peppers' appearance at Coachella in 2007.© Tim Mosenfelder/Corbis

"Things are good," says Chad Smith, drummer for the Red Hot Chili Peppers, Chickenfoot and The Bombastic Meatbats. "If good means exceedingly crazy and busy, then they're very good.

"I just finished some great shows with the Foot, I'm making a Chili Peppers record, and now I've got the Meatbats' latest and greatest album ready to come out. I've said this before, but I either need to clone myself or grow another set of arms so I can keep up with all of my bands and projects. I can't believe I'm getting ready to go on a Meatbats tour in a few weeks."

When pressed, however, to explain how he can possibly been in three places (and bands) at once, Smith comes clean and says, "The truth is, we finished this new Meatbats record, More Meat, a year ago, before I left on the first Chickenfoot tour. We cut it in April of 2009, so it's been in the can for a while. There's your smoke and mirrors for you. Still, it's pretty fresh. I'd say it's a vast improvement over the first record."

A fun and altogether engaging affair, More Meat picks up where the band's debut, Meet The Meatbats, left off, finding Chad and his fellow 'bats (guitarist Jeff Kollman, keyboardist Ed Roth and bassist Kevin Chown) shifting gears seamlessly from smooth jazz to funk to rock on a dozen instrumentals. They even serve up an inventive, slow-groove take on Led Zeppelin's classic Moby Dick. "That was pretty daring of us," Smith says. "But we try to not place any restrictions on ourselves, so we'll take chances like that."

According to Smith, "We had more of a band chemistry going on with the new record. It felt like a real cohesive unit. We wrote the songs together, more or less, so there's more of a communal vibe. It's a real group thing. It's just more... well, it's More Meat!"

In the following interview with MusicRadar, Smith discusses the recording of The Bombastic Meatbats' More Meat. In addition, the triple-timing drummer talks candidly about his tenure in Chickenfoot and offers his thoughts on the progress of the upcoming Red Hot Chili Peppers record, their first with new guitarist Josh Klinghoffer.

Let's start with the most important question I could possibly ask you, Chad. The new album's title, More Meat - does it have any significance?

"Well, it means…I don't know. [laughs] No! No special meaning. We thought about calling it Second Helping, but Lynyrd Skynyrd already did that. So we decided, 'We gave you some meat, and now we've got…More Meat!' I don't know what the third one will be. It'll be protein-oriented, I'm sure."

"Extra Meat, sure. I like it. We're a simple band that's into grand statements. More Meat…one can take from that what one wants. I like the title, and the cover, too. Now we're like superheroes. We look like KISS on the Destroyer album or something."

But you're missing the girls on the bottom. They should be looking up at you lustfully.

"No, see, you're mixing up your KISS records, Joe. That was Love Gun."

You know, you're right. Yes, that was Love Gun.

"Yeah, we'll have the scantily-clad vixens on the next record. You can count on it. Hot, sweaty vixens overcome with lust, rubbing our legs."

You're going for subtlety.

"Exactly! [laughs] That's what the Meatbats are all about - subtlety, nuance…"

Let's talk about the writing process. Obviously, the album is very jam oriented. How did the songs evolve? Did Jeff bring in a lot of riffs?

"Sometimes. With this record, it was kind of everybody bringing stuff in. Sure, Jeff always has a few riffs in his pocket - never finished songs, just ideas."

Does he play them for you live, or does he sometimes send you MP3s of song ideas?

"Sometimes he sends files around, yeah. And other times Ed and I will work together a lot and get something going. We'll jam and I'll figure out a cool groove, and that will inspire Jeff to bust out a riff. Those are pretty much the ways that songs evolve with the Meatbats. We get together in my Tiki Room at my place in Malibu and bang it out.

"You know, because there's no singing, the onus is on Jeff and Ed to come up with melodies. What I tend to do is help frame everything and be something of a conductor."

Do you have to help reign people in? I can imagine some of these songs can go on for 20 minutes if you let them.

"Yeah, I do have to kind of yell, 'Cut!' or 'Next section!' from time to time. But the other guys do, too. It's a democracy, but we try to watch one another's backs. The thing is, it's instrumental music, but there's intros, there's verses, choruses, solo sections - they're songs. Songs with lots and lots of playing." [laughs]

But one thing the songs don't have - and I was expecting this - are drum solos. I would figure this kind of outfit would offer the perfect platform for you to solo. Although you do go off a bit on the song Mountain Of Meat…

"Is that what it's called?"

Yeah, it's the second track on the record.

"Oh, right. It was just called 'Mountain' for the longest time. It's kind of our homage to Mississippi Queen. I've got the cowbell rockin' on that one. But as far as drums solos go, I think they're self-indulgent. Maybe if you're Ginger Baker you can do it in a cool way that works for the music. I just can't seem to play a solo without feeling like I'm trying to draw unnecessary attention to myself. I don't even play a solo in our cover of Moby Dick!"

Which I was going to ask you about. You change the arrangement around considerably. Now, it's a slower, funky kind of song.

"That was the only way. I mean, come on, if we were going to play Moby Dick like Led Zeppelin, we'd really be asking for trouble. How can you make it better than the original? You can't. So we just started messing around and made it our own. I have to be honest: I wasn't too crazy about putting it on the record, but the other guys loved it, so I said, 'OK.'"

Another homage is the song Dr Blotter & Miss Purple (Ride In The Echoplex). That one really sounds like Wes Montgomery meets The Doors.

"Yeah, in their Riders On The Storm period. Exactly. It's jazzy but psychedelic. I really like that one. It's probably us at our jazziest."

Yes, but you do have the song Shag, which could almost be described as "smooth jazz."

"With a bit of a hip-hop beat. And what's amazing is, the song is getting played on those smooth jazz stations. It's hysterical to turn on The Wave and hear the DJ say [adopts a low-toned, whispering DJ voice], 'Yes, that was Larry Carlton with The Yellowjackets, and before them we had…The Bombastic Meatbats and Shag.' [laughs] Totally cracks me up."

Despite your Chili Peppers schedule, you're going to do some dates with the Meatbats.

"Pretty soon, yep. We've got some shows in LA and then we're going to be playing the East Coast. I imagine the other guys would like to do more, but they've got other projects, too. And if I can't play shows, other drummers can come in. We've had guys like Kenny Aronoff and Matt Sorum fill in for me."

This seems to be a recurring theme with you, Chad. Lately, there's been some speculation about you and Chickenfoot.

So what is the story with you and Chickenfoot? From what I understand, you're going to finish the album early next year, but what about touring?

"We'll start the album next year. We've demoed four songs already, and Joe's got a bunch more. The plan is to get back to recording after Joe's done with his tour in January. I should be free then. I know I'll be free. The Chili Peppers record won't be finished - there'll be more work to do on that - but I'll be done with my tracks. So I should be good for cutting a Chickenfoot record, but I don't think I'll be able to tour behind it."

You're pretty certain of that?

[sighs] "Yeah. The Peppers have festival dates booked for the summer of 2011 already, so I can't play in both bands next year. Believe me, I'd love to play with Chickenfoot, and I am pretty certain I'll be able to finish the second record. We have a chemistry that really works, and I'm really excited to get deeper into the music with those guys. Touring, though…I don't see how."

Have you given your vote to a fill-in touring drummer for Chickenfoot?

"I don't have a preference, it's whoever they want. I'm cool with it. You know, Chickenfoot started out as this fun thing to do, and then it just got bigger and bigger. Everybody loves it, and I love it, too. We have the best time together. But hey, I got this other group. It's funny: I'll be talking to Joe Satriani about Chickenfoot stuff, and then when I bring up the Chili Peppers he'll say, 'Oh man, I keep forgetting you're in another band.'" [laughs]

How are things with the Peppers?

"Things are good. Very good. We've cut a bunch of songs, so we're probably halfway through the record. I think we've tracked about 20 songs already, and there's a few more left to do. Then we'll whittle them down to make the best record. We always cut a lot of songs and see which ones rise and which ones fall - that's just how we like to work. But the new one won't be a double album like Stadium Arcadium, I can tell you that."

Do things feel any different with Josh Klinghoffer? How's he working out?

"Things are a bit different. You know, he's a different guy. But he's doing great. He's got a terrific sound, he's very musical, he's full of ideas - we're enjoying working with him. Things are coming along pretty easily, so that's always a good sign. I've been playing with him for over a year now, so it's feeling very natural.

"What I'm really liking about Josh is how multi-talented he is. He plays guitar, bass, piano, drums, he sings…We've been very fortunate to have him come into our fold and help inspire us to try some new things."

Is his guitar sound radically different from John Frusciante's?

"I wouldn't say it's radically different. Josh is just Josh. He has his own thing, and that's why we love him. The sounds he comes up with are very pleasing to my ears, and I'm pretty sure they will be to everybody else once they hear him on this record."

If the Chili Peppers have dates booked for next summer, I would assume that you'd want the album out by then.

"That would be nice. We probably have three to four more weeks left for cutting basic tracks. Then we'll start doing overdubs - guitars, vocals, all the other things that go on a record. After that, there might be a couple of things to do in January. Or we could start mixing - and as you know, that can take some time. I'm just projecting and guessing, but I would say we'd like to try to deliver the album in March. We're definitely hoping to have it out by next summer. It's been a long time in coming."