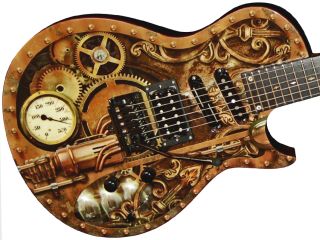 PRESS RELEASE: Buddy Blaze Fine Stringed Instruments has teamed up with Scott Patton to unveil its new signature model, the Generator. The guitar will be unveiled to a national audience on ABC's Good Morning America as part of their Summer Concert Series (28 May 2010).

The new Buddy Blaze Generator features a custom graphic designed by renowned graphic designer, Stephen Jensen. The Steam Punk Generator artwork was created to specifically compliment Sugarland's The Incredible Machine tour. The guitar will be part of the handmade ALII Series with plans for a second model to be added to their value priced production line in the near future.

Scott Patton is the Band Director and Lead Guitarist for the dynamic super duo, Sugarland. The band is currently out on the road preparing for their new release scheduled in October, entitled The Incredible Machine.