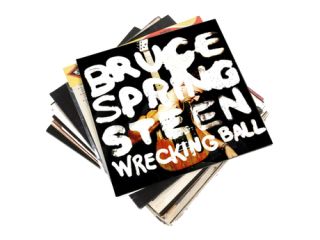 For much of the 21st century, Bruce Springsteen has been inspired to produce albums reacting to specific incidents in his homeland.

The Rising, from 2002, was a set of songs mostly triggered by 9/11; an attempt to make sense of those shocking events, and perhaps offer a way forward for a stunned America to try and heal itself. Devils & Dust (2005) was a direct response to George W Bush winning a second term in the White House; a sombre chronicle of disillusionment and a suggestion that things would get worse before they got better.

Wrecking Ball arrives with large parts of the world, America included, in the grip of recession, its songs of rage soundtracking a divided nation, with Bruce plainly rooting for the man on the street, and taking the authorities to task. But, unlike Devils & Dust, this is not an album without hope, and its two closing tracks in particular are gloriously optimistic.

The album also marks the last appearance on record of sax player Clarence Clemons, for so long Bruce's wingman in the E Street Band, especially on the live stage. It's fitting that The Big Man should bow out with The Boss on such great form, delivering one of the best albums of his career.

We Take Care Of Our Own

The album's first single is a guitar-fuelled anthem, with understated strings offering a counterpoint to the melody midway through. It's a classic Boss-like blue collar call to arms, Springsteen berating the rich and powerful for ignoring the underclass. Were it not for the amped-up inspiration, this could be a vintage Woody Guthrie folk protest, and the spirit of Guthrie looms large throughout the album.

A Bo Diddley-like shuffle, an acoustic guitar duelling with Soozie Tyrell's violin, but with Celtic motifs, like The Pogues in party mode. Not for the last time, Springsteen's lyrics allude to fat cats, and a working man going out on the town packing a Smith & Wesson. Is the protagonist hitting the town to forget his worries, or does the firearm suggest something more sinister?

Another blast of folk, the melody resembling a traditional work song, or even a prison chain gang, and the ambiguity is most likely intentional. The key instrument is Charlie Giordano's accordion, with some choice gospel testifying from Cindy Mizelle over the fade-out. Again, it's a study of the haves and have-nots: "Trudging through the dark in a world gone wrong/…Up on Banker's Hill the party's going strong."

Jack Of All Trades

Set to a country waltz with added New Orleans funereal brass, the swaying melody marks the song out as a potential future live favourite. Springsteen sings of dignity in tough times, about working men struggling to find honest toil. It could be read as either a paean to post-Katrina survival (it's unclear whether the "hurricane" mentioned in the lyric is real or a metaphor) or as another, broader tirade against the economic downturn.

Death To My Hometown

A more pointed attack on the powers-that-be and a rallying cry to those left behind, performed in the manner of a US Civil War marching song, complete with precision drumming and penny whistle. Springsteen sings of a death without violence or guns but how the authorities' policies and negligence stripped people of their worth ("they destroyed our families, factories, and they took our homes"). Springsteen has rarely sounded so angry.

Booming drums give way to a strident acoustic guitar, the mood hymnal and confessional, as opposed to the rage of earlier tracks. Bruce sings as a downtrodden man seeking solace in love ("I haven't always been strong, but I've never felt so weak"), offering a tone of weary resignation.

A jangling electric guitar, played to a clipped Woody Guthrie folk gallop, and Springsteen is once again in defiant mood. This is the sound of The Boss at the head of the march, banner held high, and challenging big business to "give it your best shot". E Street drummer Max Weinberg provides the fierce backbone, and it's one of two tracks recorded last April to feature Clarence Clemons, although his saxophone plays only a supporting role to Soozie Tyrell's combative violin.

The least weighty track on the album, in terms of lyrical content, its steady rock 'n' roll groove and Springsteen's drawled vocal placing it in the same category as State Trooper or Pink Cadillac. It's practically a 12-bar rocker, the kind of song one could imagine Eddie Cochran playing, with Bruce's urgently struck acoustic augmented by lap and pedal steel.

The Victorious Gospel Choir chant the intro over a sombre rhythm similar to Streets Of Philadelphia, with Springsteen in reflective mood. Again, it's a song about struggle in the face of adversity, albeit it one liberally sprinkled with Biblical references. The lyrics quote directly from Hard Times Come Again No More, the 1854 Stephen Foster "parlour" song that has intermittently featured in Springsteen live sets over the last decade or so.

Land Of Hope And Dreams

The album's most anthemic song was first heard on the 2001 release Live In New York City, but this studio version was recorded last April and has since taken on the form of a eulogy to Clarence Clemons (contributing a rousing sax solo in his last ever session), not least for the lyric about "sweet souls departed". Uplifting and optimistic, the chorus is based on the traditional negro spiritual This Train (Is Bound For Glory), while the entire song is bookended by quotes from Curtis Mayfield's People Get Ready.

The wave of optimism continues on the closing track, with a brisk country strum, again in the mould of Woody Guthrie, with a nod to Johnny Cash's Ring Of Fire. Springsteen sings in the first person. "I was killed in Maryland in 1877, when the railroad workers made their stand," refers to one of the 10 men gunned down by National Guard troops during America's Great Railroad Strike, while he assumes the role of slain civil rights activist Medgar Evers in the second verse ("I was killed in 1963, one Sunday morning in Birmingham"). It ends the album on an uplifting note, suggesting that people who make a stand will, in some way, live on by inspiring others: "Our souls will rise to carry the fire and light the spark".

Springsteen has long been one of America's most articulate and evocative singer-songwriters, never one to shirk his responsibility as a voice of the people. He's rarely dabbled in party politics, and again Wrecking Ball offers a wider non-partisan focus on the woes of his country.

With the exception of Clemons and Weinberg, no long-serving member of The E Street Band makes an appearance (although later years recruit Soozie Tyrell's violin crops up on more than half a dozen tracks), Springsteen opting to tailor the instrumentation to each song's individual needs. Rest assured, however, that several of these cuts will receive a passionate E Street makeover when the band reconvenes for live shows later this year.

Consistency has always been a hallmark of Springsteen's music, an unwavering quality control that hasn't dimmed even now that he's well into his '60s. Wrecking Ball has a lot to live up to, then, but it emerges triumphant as one of Bruce's masterpieces.