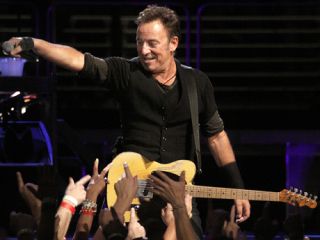 With the tragic passing of beloved E Street saxophonist Clarence Clemons last June, millions of fans have wondered when Bruce Springsteen and the group would be back in action.

The answer is...quite soon. In a posting on his official website, Springsteen says, "Well, things are starting to heat up down on E Street. A lot of you have been hearing that Bruce Springsteen and the E Street Band will be on tour in 2012. That is absolutely correct. The European dates run from the middle of May until end of July and are being announced this week. Info on the US dates and the World tour dates will coming up shortly."

A world tour also means a new album, as Springsteen says that "we want you to know that the music is almost done (but still untitled), we have almost settled on the release date (but not quite yet), and that we are all incredibly excited about everything that we're planning for 2012. That's all the info we have for right now, but we'll get back to you--real soon."

No word yet on who will be replacing - if such a word can even be uttered - Clarence Clemons in the E Street Band, but here's the first dates so far: