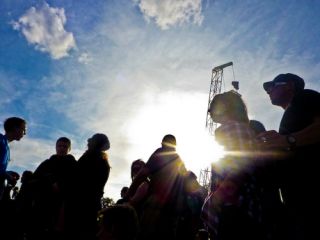 On arrival on Saturday, the finale of the touring heavy metal pageant that began in Nijmegen in the Netherlands on 20 June feels somewhat sedate. The Knebworth site is compact, yet there's still plenty of space to sit down away from the writhing masses in front of the Apollo and Saturn stages.

Despite their set coinciding with the sky collapsing on our heads and a spate of poncho panic-buying, Aussie rockers Airbourne provide the day's first real highlight. Their refried AC/DC chic may be far from cerebral, but sometimes you need a bare-chested man to climb a 50ft speaker stack and play a guitar solo on top of it in order to distract you from the rain.

As if sensing our inability to resist a cheesy slice of wordplay, the heavens remain open for Heaven & Hell. Ronnie James Dio's voice is clearly still in great shape - certainly better than Ozzy's these days - but despite the band and riff-lord Tony Iommi in particular putting in a killer performance we can't help wanting to hear Dio's Holy Diver or a Sabbath classic like War Pigs.

The apocalyptic hue of the skies above would certainly have provided a suitably foreboding visual accompaniment. Is it really August?

We head to the Bohemia tent for some welcome respite from the rain and arrive in time to see Oceansize being forced to undertake a prolonged, undignified line check in front of a couple of thousand people. Frankly, they deserve better, and their all-too-brief set crams more invention and visceral thrills into five songs than many bands manage in a headline set.

Something brilliant has happened: we emerge from the Bohemia tent to find that not only has it stopped raining, but the sky has turned sixty shades of pink and orange. As the sun sets, it's squishy underfoot, but certainly not a mudbath from a Pilton veteran's perspective.

So then to the Apollo stage and day one's biggest draw: Linkin Park. In the weeks before the festival, Chester Bennington talked a very good game, promising to "kick some ass" and possibly even come away clutching the Best Live Band In The World title belt.

Sadly, the execution is lacking and the set sags horribly in the middle. When the hits come out they sound dated and the absolute nadir sees Bennington drag his Dead By Sunrise side project onstage for an encore that no-one in the crowd seems to be shouting for. They proceed to rattle through an incredibly lame Nirvana rip-off before being sucked into an ego vortex visible from space.

By the time Linkin Park close their set with One Step Closer, we're on our way back to the Bohemia tent to see Brit hard rockers Thunder play the last ever show of a twenty year career. Singer Danny Bowes is in fine voice and though they may be about as cool as Jeremy Clarkson in a hot tub, several thousand people drunkenly wailing along with Love Walked In don't care one bit.

Thunder's swansong is followed by a set from the The Wildhearts and somewhere in the blur of I Wanna Go Where The People Go we wonder if it really is 2009 after all. It must be time for bed.

Food at festivals is overpriced and disgusting, right? We'd mostly be inclined to agree but breakfast on Sunday proves to be unexpectedly civilised thanks to Tea & Toast.

A small van that does the rounds at many of the summer festivals, Tea & Toast comes highly recommended for its tasty menu, excellent service and the fact that you can get a large cup of tea from them for just £1. We strongly suggest that you try the gourmet vegetarian bacon roll.

As Sunday's entertainment begins it's abundantly clear that Metallica are the weekend's main attraction. The weather has brightened up considerably and it's again possible to sit on the grass without getting wet, but there's simply much less grass visible today thanks to the additional black-clad reinforcements that have arrived on site in anticipation of Metallica's only UK festival appearance of 2009.

However, there's plenty going on before the Bay Area thrash scene's most famous sons take to the stage. Following on from a strong presence at Download last year, Jackson Guitars have a full-on outdoor stage for their Riff And Destroy competition, with Mikey Goodson triumphing over the other aspiring shredders and walking away with a Jackson Demmelition King V guitar for his trouble.

While virtual guitarists battle it out in the Guitar Hero tent, over in the backstage area we find Alice In Chains hanging out in the rather plush Gibson Guitars tourbus and are lucky enough to grab Jerry Cantrell for an interview which will appear in a forthcoming issue of Guitarist magazine. We want his black Les Paul Custom but sadly he'll shortly be too busy putting it to good use in a set that includes Alice In Chains classics like Would and Them Bones on the Saturn stage.

Before that, over on the Apollo stage, Fred Durst is at great pains to mention - only about nine million times during the Limp Bizkit set - that he doesn't give a fuck.

Someone who plainly does give a fuck is Bizkit guitarist Wes Borland. Eschewing the Papa Lazarou look that he was rocking at Download in June, for Sonisphere Borland's combination of outfit and body paint is what you might imagine Heath Ledger's Joker would wear to a Nazi S&M party; there's obviously much preparation required.

Meanwhile, Durst looks like he's come dressed like a member of Goldie Lookin' Chain. Perhaps he really doesn't give a fuck after all.

When Nine Inch Nails take to the stage for their last ever UK show, a few things quickly become clear: Firstly, Ilan Rubin might just be the best thing to happen to the drum world since Dave Grohl. He hits like a sledgehammer and has amazing feel.

Secondly, watching Trent Reznor do his thing in bright sunlight is kind of weird.

Finally, and most significantly, Reznor has absolutely no intention of playing a crowd-pleasing hits set today. Okay so NIN finish with Hurt, but is a setlist consisting of largely minimalist, piano-driven experimentation really the best way to sign off?

One thing is for sure, Metallica's recent setlists show that they aren't shy of milking their back catalogue for all it's worth. Apologies to Perturbing Fence and the rest of Avenged Sevenfold, but we skip their performance to go in search of more liquid refreshments in anticipation of the band that it feels like the whole weekend has been building up to.

With the field now fit to burst, it's up to Metallica to deliver. And boy, do they ever. From the crushing opener Blackened through Sad But True, Creeping Death, One and Dyer's Eve to the closing strains of Seek & Destroy, Metallica play a ferocious, career-spanning set.

It's everything a festival headline show should be and for a band whose personal demons have been so well-publicised, it's genuinely heart warming to see them playing with at times almost adolescent exuberance.

Perhaps the most impressive thing about the Metallica live experience is Hetfield himself. Quite apart from his gargantuan larynx, the sections when his guitar drops out and he engages with the crowd prove beyond question that his metronomic rhythm playing is the glue that binds Metallica's sound.

At the end of the set, we discover that it's Hetfield's birthday as he gets plastered in custard pies by his bandmates and crew. As he thanks the crowd repeatedly and tosses picks it seems that he genuinely doesn't want to leave the stage. And who can blame him? The view must look pretty damn good from the top of the tree.

As the crowd finally disperses we head to the VIP bar for a game of massive draughts before hitting the silent disco until the small hours. See you in 2010, Sonisphere.