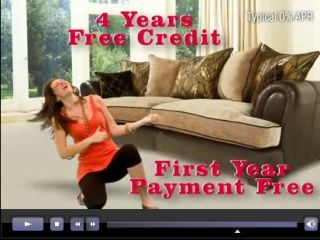 A woman lives out her Rockstar fantasies. In a sofa shop.

I didn't think it was possible for me to detest Nickelback's Rockstar any more than I already did, but last night, my dislike of both the song and the band went nuclear. Sitting at home watching the TV, I was aghast as I saw it being used to soundtrack an advert for a UK furniture store.

If you're feeling brave, you can watch the ad here - make sure you've fully digested your breakfast before you click - but for the benefit of those who don't want to put themselves through 30 odd seconds of utter misery, I'll explain the concept: a bunch of different people go into a shop to buy a sofa and mime to Rockstar while it plays in the background. And that's it.

The late Bill Hicks once said that anyone who does a commercial automatically removes themselves from the artistic roll call and, while I wouldn't go quite that far - I'll explain why in a minute - Nickelback can consider themselves ejected from said list as of now (though, to be fair, I wouldn't have had them on there in the first place). Why? Because they simply don't need to sell their music to the highest bidder.

At the time of writing, Rockstar is the second highest selling UK single of the year so far, and the band have just a signed a mega-bucks '360' deal with Live Nation. This being the case, the only conclusion you can draw is that Nickelback are more interested in chasing the dollar than they are in credibility.

For new artists, though, I'd say that the rules are slightly different. With the record business currently in disarray, making a living from music is getting more and more difficult so, providing the company that's writing the cheque isn't morally reprehensible, you can't really have a go at people for taking the opportunity to get some exposure and make a bit of cash.

However, whether it's Sting selling performance cars (isn't he supposed to be an eco-warrior?), The White Stripes peddling a soft drink or Nickelback flogging couches, the spectacle of well-heeled musicians taking the corporate dollar doesn't sit well with me at all.