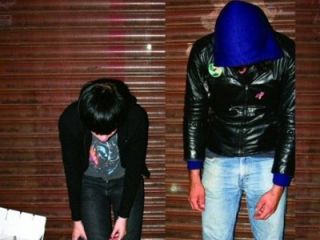 Crystal Castles are set to be big, but is their sound really new?

Reading The NME´s ‘Future 50´ - a list of the 50 people/bands who are supposedly shaping the future of music in 2008 - several things struck me. Firstly, there´s the fact that I´d never previously heard of some of the entrants - maybe The NME itself is just too cutting edge for me these days.

Then, of course, there´s the question of who qualifies, and for what reasons. Radiohead´s decision to let people pay what they wanted for In Rainbows was certainly significant, but was it really revolutionary? They were hardly the first band to experiment with alternative distribution methods, and it should also be noted that the album has since been released on CD and is on sale in all good record stores.

You also have to wonder about the inclusion of Crystal Castles. Yes, they sound different to most of their contemporaries, but the chiptune sound that informs their music could hardly be described as new.

What can´t be denied, though, is that getting ahead in the music business is no longer simply about making great music. Increasingly, new acts are facing up the reality that they need to think differently - and yes, innovatively - if they want to make it big. Even going the MySpace route - something that Arctic Monkeys´ Alex Turner is honoured for pioneering in the NME list - now seems vaguely old hat.

Although new technology and distribution methods mean that it´s easier than ever to produce a studio-quality album and put it ‘out there´, you could argue that making a living from your music has never been more difficult. If the record industry as we´ve known it is to die, it´ll be every band and artist for themselves, and in a climate like this, innovation may not be as important as a serious amount of hard work.

So, who do you think are the top innovators in music today? Is there one band or person that you think will shape the future more than any other? Let us know in the comments section below.